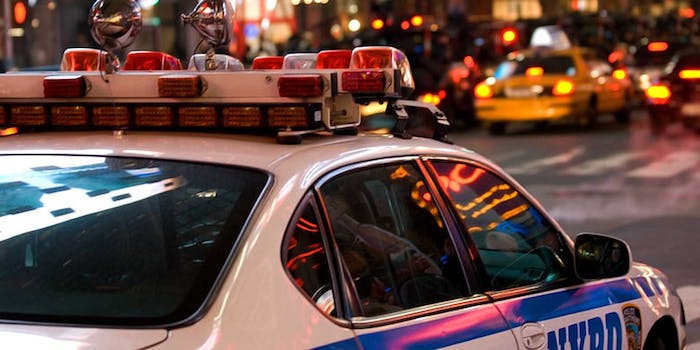 For the millionth time: it is perfectly legal to film the police.

If you want to understand why a recent Gallup survey found that about half of Americans often distrust the police, all you need to hear are the six words one NYPD officer yelled at a man filming him in the line of duty: “Your First Amendment ends right here!”

In a video posted to YouTube last week by Danny Panzella, the founder of New York-based police watchdog group Peaceful Streets Project NYC, a NYPD officer can be seen telling the longtime cop-watching activist the limits of his rights to stand up to the police and film the results.

The video begins with the officer threatening to arrest the videographer for “disorderly conduct,” there is no indication of exactly what came before; but, Panzella told the Daily Dot that he was eating hot dogs with his three-year old son in front of Brooklyn’s Atlantic Center shopping mall when he saw a mall security guard detain a taxi driver for picking up passengers in a fire lane.

A taxi driver himself, Panzella felt some sympathy and went over argue on the driver’s behalf.

After a few minutes, a trio of police officer arrived on the scene. One officer repeatedly told the Panzella to “walk away,” but Panzella insisted his First Amendment rights allowed him to “stand right here and videotape.”

“If your son wasn’t here, I’d lock you up in a heartbeat,” the officer responds. “Your First Amendment ends right here!”

A bystander off camera can be heard urging Panzella to “ease up” and just do whatever the police ask. Panzella eventually turns over his ID and begins talking to another officer, while the first cop who initially detained him can be heard in an argument off camera yelling, “freedom of speech only goes so far.”

Eventually a sizable crowd forms, and one of the officers says that the gathering is evidence that Panzella was causing a disturbance. However, at this statement, a few members of the crowd retort that they only there to make sure that the cops don’t assault the videographer—although sentiment in favor of Panzella isn’t uniform. One women just advises Panzella to do whatever the officers insists and the only reason he isn’t beaten bloody and in handcuffs is that he is white. Panzella tells her he agrees wholeheartedly.

Panzella was ultimately issued two summons for “obscene language” and “unreasonable sound,” although the cab driver was allowed to leave without any consequences—one of the advantages of having someone else make a big scene. There’s also a bit irony in the videographer being issued an “obscene language” citation for swearing when on the cops is recorded saying “shit” at about 3:20 into the video—although Panzella admits that he was “dropping some F-bombs” before he started filming.

Representatives from the NYPD did not respond to a request for comment.

A longtime activist, Panzella started The Peaceful Street Project a few years ago largely as a response to the NYPD’s stop-and-frisk policy. “[Activists like me] have always been harassed, but kept seeing young people—mostly African-American teens and kids—being stopped and frisked on the subway. It didn’t seem fair.”

Panzella began doing things like handing out cards detailing the rights of people being stopped by police, and once handing out flyers in the midst of an anti-terrorism drill being conducted at Penn Station in Manhattan. Unsurprisingly, these type of activities have gotten Panzella in hot water with police before and, as a result, he seems relatively confident in how the the consequences for his most recent altercation are going to play out.

“Generally, when I go to court to fight these things, they just dismiss them as soon as soon as I say the words ‘First Amendment’ because a fight over free speech is going to be long and complicated,” he explained.

While police officers often have broad discretion on whether to issue citations of for things like “unreasonable sound,” it is completely legal in the United States for citizens to film law enforcement officers while they’re on the job.

NYPD officer even recently received a refresher on their obligation to allow citizens to film them.

The New York Daily News reported in August that a memo circulated from police chief Philip Banks insisted, “Members of the public are legally allowed to record police interactions. … Intentional interference such as blocking or obstructing cameras or ordering the person to cease constitutes censorship and also violates the First Amendment.”