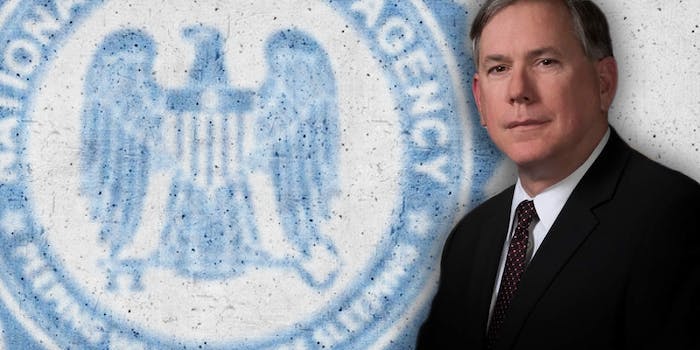 When asked if the NSA planned to change its surveilliance practices in September, Richard Ledgett responded "We operate within policy constraints."

The identity of the next head of the National Security Agency, expected to take over for Gen. Keith Alexander  in March or April of 2014, is still up in the air.

There’s already been plenty of speculation about who will succeed Alexander, 62, who announced in May that he had less than a year left before retirement. But less ink has been spilled on Alexander’s deputy, John (Chris) Inglis, who’s slated to resign in January 2014.

Inglis’ successor will reportedly be the man currently in charge of putting a band-aid on the agency after it was rocked by massive leaks that detail some of its most powerful surveillance programs.

Sources have told Reuters that the next deputy director of the NSA will be Richard Ledgett, an NSA executive whose current job is dealing with the fallout from the actions of former NSA contractor Edward Snowden, who leaked hordes of internal agency documents that revealed electronic surveillance activities at home and abroad.

According to the Guardian, Ledgett’s current job is heading a taskforce created specifically to address Snowden’s leaks, their aftermath, and the challenge of preventing similar disclosures in the future.

The White House declined the Daily Dot’s request for information on whether Alexander’s successor would have a different sense of surveillance than his predecessor, and the NSA didn’t respond to a request for comment.

In September, Ledgett told Charlotte’s NPR affiliate that the agency had little drive to change its surveilliance practices, despite public opposition. “That’s a policy decision, he said, “and we don’t make that call.” He added that the agency operates “within policy constraints.”

Unlike Alexander and Inglis, Ledgett’s online presence is rather opaque. His name doesn’t appear on the websites of the NSA or the office of the Director of National Intelligence (ODNI). One of the few online photos of him is from a speaking engagement  in 2011, when he worked as an ODNI executive. Notes from other talks show that by August 2012, Ledgett was working for the NSA, as director of its Threat Operations Center.

It appears the man tasked with sewing up information leaks has started with his own online presence.