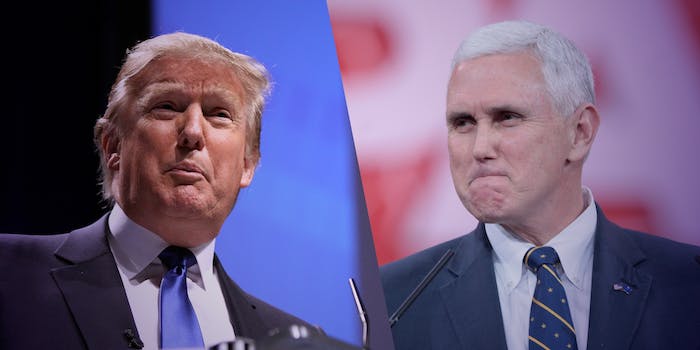 Taking trolling to another level.

Some people really don’t want to see Donald Trump prosper—especially those in the #NeverTrump movement.

After it was leaked that the presumptive GOP nominee would choose Indiana Gov. Mike Pence as his vice president, the internet came out swinging.

As reported by Mediaite, someone purchased the domain name TrumpPence.gop and redirected it to the #NeverTrump movement’s website.

The site leads to a page which features the signatures of more than 47,000 individuals who’ve pledged to never vote for Trump.

“We, the undersigned, will never vote for Donald Trump,” the website reads. “We stand united to defend basic, common decency and Constitutional principles. And we will do our part to deny Donald Trump the Republican nomination and ensure that he never becomes Commander-in-Chief. Never means never.”

Looks like Pence and Trump will have to find another domain name if they decide to run on the same ticket. It seems like TrumpPence.org is available?