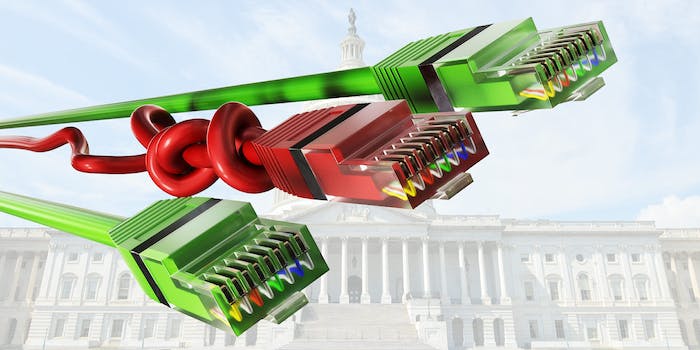 The new Democrats in the House have been vocal in their support of net neutrality–how will that translate in Congress?

A majority of the newly-sworn in Democrats in the House of Representatives have made public statements supporting net neutrality, giving advocates hope that the new members of Congress will have the issue in mind moving forward.

The Daily Dot examined past statements from all 64 new Democrats who were sworn into the House of Representatives last week and found that at least 45 of them publicly supported net neutrality. Several new lawmakers criticized the Federal Communications Commission‘s (FCC) decision to rescind the rules in 2017 while others tried to drum up support for the efforts to the use the Congressional Review Act (CRA) to overturn the agency’s decision that ultimately was unsuccessful.

With so many new lawmakers having expressed support for the issue, the question remains whether the Democratically controlled House of Representatives will act on net neutrality, despite a Republican-controlled Senate, or wait until a new FCC head is picked if a Democrat defeats President Donald Trump in the 2020 election.

Regardless of the decisions the new lawmakers make, net neutrality advocates said the 2018 midterm elections ushered in a group of candidates who understand the issue and their vocal support gives them hope that if legislation is considered, they won’t push through a lackluster bill.

“In the coming months, [internet service providers] will only grow bolder in their pursuit of anti-open internet practices that pad their bottom lines while sticking it to consumers, making it all the more urgent that Congress act immediately,” Mark Stanley, the director of communications at internet rights group Demand Progress, told the Daily Dot this week. “Given the new makeup of the House, and the fact that grassroots remain highly energized on this issue, we’re confident we can pass legislation in the House that restores net neutrality protections. Members who do not support such common-sense legislation risk major backlash from all those who depend on an open internet and are fed up with corrupt Beltway pandering to giant corporations at the expense of ordinary constituents.”

Many of the House Democrats who were sworn in last week criticized the FCC’s decision to rescind the net neutrality rules as candidates during the agency’s controversial vote in December 2017.

Rep. Abby Finkenauer (D-Iowa) posted about the FCC vote days before it took place, showing her support for keeping net neutrality rules in place and warning that without them it would “stifle innovation, weaken competition, and hurt small businesses.” Meanwhile, Rep. T.J. Cox (D-Calif.) tweeted his support for net neutrality the day of the FCC’s vote, adding “having an open internet is essential to having a strong democracy.”

Other now-congresspeople like Rep. Lizzie Fletcher (D-Texas) pushed her Twitter followers to call the FCC ahead of its vote and ask for the net neutrality protections to remain in place.

Some candidates went a step further.

Ocasio-Cortez participated in the Internet-Wide Day of Action To Save Net Neutrality, which brought together hundreds of websites across the internet to protest the FCC’s upcoming vote. The New York lawmaker, then a candidate, said her campaign website would participate in the event by having it post a pop up directing people to contact their representatives about it.

Rep. Anthony Brindisi (D-N.Y.) pushed a net neutrality bill while a member of the state assembly in New York before being elected to Congress, according to WIBX950.

Other newly-elected Democrats applauded the net neutrality CRA efforts. The Congressional Review Act could have allowed Congress to overturn the FCC’s net neutrality decision by passing in both the Senate and the House. The Senate passed its CRA last summer, but the House version fell 36 signatures short of reaching a simple majority needed to force a vote. If it had been successful in the House, the president would have needed to sign off on it.

Rep. Elissa Slotkin (D-Mich.) marked the passing of the Senate CRA in May by calling it a “win for everyone who values a free and open internet,” and added that its passage was a “demonstration of what can happen when our elected representatives truly put real people first–not corporations.”

Today's passage of #NetNeutrality in the Senate is a win for everyone who values a free and open internet, and a demonstration of what can happen when our elected representatives truly put real people first – not corporations.

However, not all of the candidates who won in the 2018 midterms are for net neutrality.  Dusty Johnson (R-S.D.) called the old FCC rules “crazy” in a campaign video and called for Congress to “act” on net neutrality. Rep. Denver Riggleman (R-Va.) said he did not support net neutrality during a debate with Democratic challenger Leslie Cockburn, according to the Roanoke Times.

What’s next for net neutrality in Congress?

With the CRA’s failure to garner enough support in the last session of Congress, lawmakers are unable to use it again with a Democratically controlled House. This means legislative options—or waiting out the clock with the hopes of a Democrat taking the reigns of the FCC after the 2020 election—remain the most viable congressional options.

Stanley, of Demand Progress, said he thought it was possible that a net neutrality bill in the House could make it through a Republican-controlled Senate. (The CRA effort in the Senate did receive bipartisan support last year.)

“Passing legislation that fully restores net neutrality in the Senate will take sustained pressure,” Stanley said. “Fortunately, the open internet movement has a clear track record of overcoming what, at first, are seen as steep odds. At this stage it’s clear that regardless of the makeup of Congress, the public simply won’t let up until lawmakers in both chambers, from both parties, do what’s right and support the full restoration of net neutrality protections crucial to people’s ability to communicate, access information, and earn a living.”

The FCC’s net neutrality decision is also being pressured by the courts. Next month oral arguments will be heard by the U.S. Court of Appeals for the D.C. Circuit for Mozilla Corporation v. FCC, which argues, in part, that the agency ignored much of the public record ahead of its vote. The public comments for the FCC’s net neutrality decision have been mired in controversy, with millions of them believed to have been submitted fraudulently.