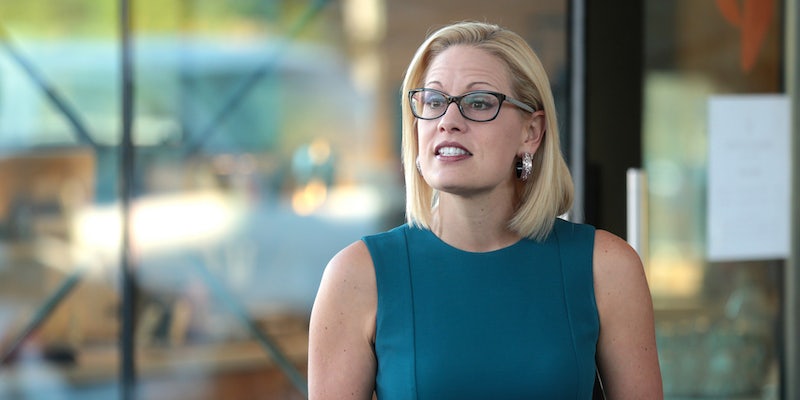 The Arizona senator's support is crucial.

Sen. Kyrsten Sinema (D-Ariz.) is the only Democratic senator who did not co-sponsor the “Save the Internet Act,” a bill unveiled earlier this week that would restore net neutrality rules that were repealed by the Federal Communications Commission (FCC).

The text of the bill was published by Sen. Edward Markey (D-Mass.) on Wednesday. It lists 44 Democrats and two Independents who caucus with the party as co-sponsors. Sinema was the only Democrat absent from the list. Congress.gov’s record of the bill also does not list Sinema as of Friday morning.

Sinema’s absence from the co-sponsor list was first noted by Politico. A representative from the senator’s office did not immediately return a request for comment by the Daily Dot. We’ll update if we hear back.

The Arizona senator’s support could be crucial for any hope of the bill passing through the Republican-controlled Senate.

Despite not sponsoring the bill, Sinema could still vote for it when it reaches the floor.

Last year, when Democrats tried to use the Congressional Review Act (CRA) to overturn the FCC’s net neutrality repeal, several Republicans broke ranks with their party to join all of the Democrats in voting for it.

The CRA effort, which essentially would have done what the “Save the Internet Act’ aims to do, ultimately failed in the House, as it was controlled by Republicans at the time.

However, the “Save the Internet Act” will seemingly pass through the Democratically controlled House, making every vote in the Senate critical. Democrats would once again need to persuade Republicans to vote for the bill, making every Democratic vote all the more important.

If successful in both chambers, the bill would need to be signed into law by President Donald Trump.

Past statements from Sinema, who was elected to the Senate during the 2018 midterms after serving in the House, about net neutrality would seem to suggest she would support the new bill ushered in by Democrats.

“While the future of net neutrality is uncertain, I believe open and equal access to the Internet is an important principle that deserves protection,” she said in 2014, according to AZ Central. “In the modern economy, so many jobs and job growth rely heavily on high-speed access to the web. Current law prevents signal discrimination among phone companies, but those rules do not currently apply to broadband providers. I am committed to supporting solutions that ensure fairness for consumers and businesses alike.”

She tweeted a link to the AZ Central story around the same time, adding: “I believe we must protect #NetNeutrality. Read and share if you agree.”

However, she was among a handful of Democrats when she served in the House last year not to sign the “discharge petition” for the CRA, which needed a simple majority of signatures to force a vote.

In the weeks leading up to the CRA deadline last year, net neutrality advocates included Sinema among other Democrats who had not signed the discharge petition on a website where people could find their lawmakers contact information to try and persuade them to sign onto it.

There has already been pressure online from some advocacy groups regarding the senator and the “Save the Internet Act.”

Retweet so @SenatorSinema knows THE WHOLE INTERNET IS WATCHING. There is no excuse for siding with big telecom over your constituents' basic right to a free and open Internet. Cosponsor the #SaveTheNet act to restore #NetNeutrality, or everyone will know who you really work for. pic.twitter.com/KG7Mp7ejYh

The House has scheduled a legislative hearing for the “Save the Internet Act” for next week. House Speaker Nancy Pelosi (D-Calif.) said they hoped to move on the bill in a “matter of weeks.”