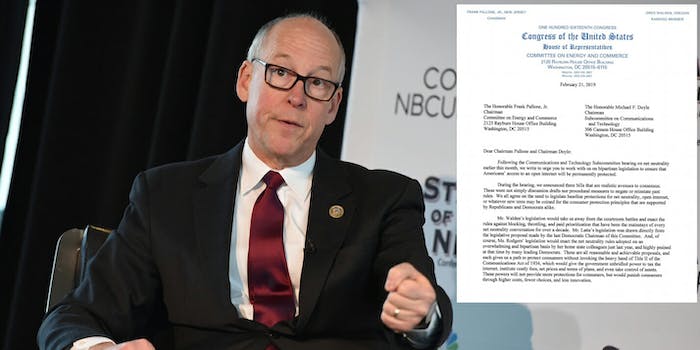 The Republican backed bills have been criticized by net neutrality advocates.

Republican lawmakers are asking Democrats to consider net neutrality bills they have proposed—all of which were criticized by advocates when they were discussed in a subcommittee meeting earlier this month.

The letter was addressed to Rep. Frank Pallone (D-N.J.), the chair of the House Energy and Commerce committee, and Rep. Mike Doyle (D-Penn.), who have been staunch advocates for net neutrality.

“We all agree on the need to legislate baseline protections for net neutrality, open internet, or whatever new term may be coined for the consumer protection principles that are supported by Republicans and Democrats alike,” the letter reads.

The Republican lawmakers noted in their letter that their bills will not classify internet service providers (ISPs) under Title II of the Communications Act, which the FCC’s 2015 Open Internet Order did. That order was repealed by the Republican-led FCC in 2017.

The Title II classification has been the largest gap between Republicans and Democrats–and that sticking point was evident during a subcommittee hearing led by Doyle earlier this month.

“We ask that you reject the special interest groups who insist on Title II or nothing,” the letter reads. “Their approach will not lead to bipartisan legislation that the president would sign.”

Representatives for Pallone and Doyle did not immediately return a request for comment by the Daily Dot.

The Republican bills were discussed during the subcommittee hearing earlier this month and were immediately criticized by net neutrality advocates, with Free Press saying they “shouldn’t be taken seriously by any legislator who claims to support net neutrality.”‘

You can read all of the letter from Walden, Latta, and McMorris Rodgers here.