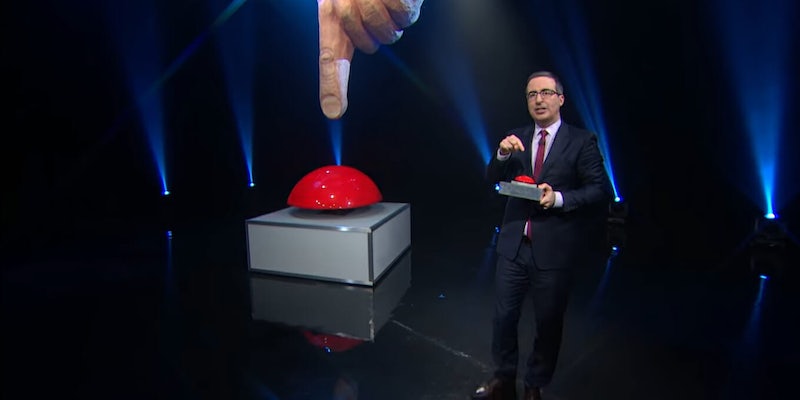 In the course of a nearly 18-minute video posted on March 10, Oliver ripped apart companies like Capital One for engaging in robocalling. His primary target, however, was the FCC—the commission responsible for policing robocalls.

The problem with robocalls

Robocalls are an increasingly prevalent issue in modern society. John Oliver defined a robocall as “any call where you hear a recording or a robot voice.” Oliver includes in his robocall description any call in which “a machine automatically dialed your number, even if there is a real person on the other end.”

Sure, some people might call their congressperson or file a complaint. Others might even stage a full-blown protest, in hopes of bringing attention to an oft-ignored issue. Not John Oliver. Instead, the 41-year-old approached the exceedingly annoying issue with his ever-present humor and biting sarcasm—by robocalling the FCC and Ajit Pai.

You may recognize Ajit Pai from that time he sentenced us all to a hopeless gladiator fight over internet access when he helped kill net neutrality in 2017. The FCC chairman has continued his legacy of screwing American consumers through his continued stance on both net neutrality and robocalls. As Oliver pointed out in his segment, Pai has long ignored any opportunity to rectify problems with telecoms.

“He could require them (telecoms) to offer free call blocking services,” Oliver said. “Or implement something called ‘call authentication’ which would significantly curtail spoofing.” Spoofing is “when a caller deliberately falsifies the information transmitted to your caller ID display to disguise their identity,” according to the FCC website. As Oliver pointed out, Pai’s decision to ‘urge’ telecoms to follow the rules—rather than requiring it—is just not enough.

A CBS This Morning report included in the Last Week Tonight episode reported that robocalls are the “number one consumer complaint to the Federal Communications Commission.” Robocalls make up approximately “60 percent of all complaints to the FCC,” according to CBS This Morning.

There isn’t much that most of us can do to convince the FCC to lessen the scourge of robocalls. Oliver’s method of trolling them with their own problem child is a great start, though. “Hi, FCC,” Oliver’s robocall begins. “This is John from customer service.

“Congratulations! You’ve just won a chance to lower robocalls in America today (insert strange robotic laughter) sorry, but I am a live person. Robocalls are incredibly annoying, and the person who can stop them is you! Talk to you again in 90 minutes—here’s some bagpipe music.”

It is simple, biting and perfect. Only John Oliver could have come up with a message so perfectly suited for the FCC. The message, according to Oliver, will be sent to all five of the FCC’s commissioners every ninety minutes. Every. Ninety. Minutes.

Oliver didn’t say how long the robocalls would continue, but he did offer the commissioners an out.

“If you want to tell us that you don’t consent to being robocalled,” Oliver said “that’s absolutely no problem. Just write a certified letter to the address that we buried somewhere within the first chapter of Moby Dick that’s currently scrolling up the screen. You got that, right?”