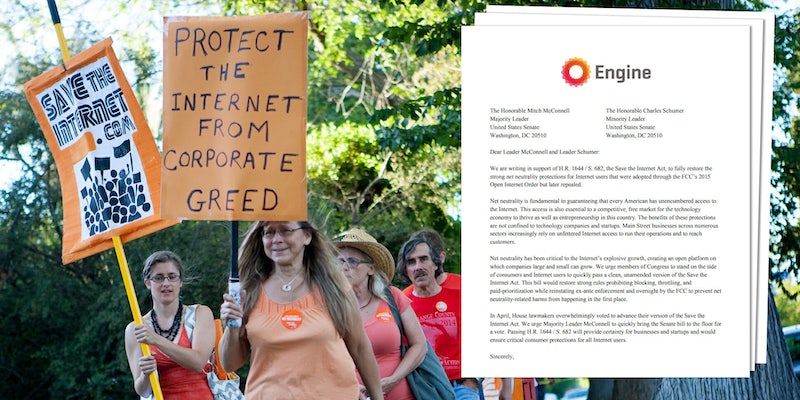 Tech startups and internet rights groups are calling for the Save the Internet Act to get a vote.

Internet rights groups and startups have sent separate letters to leadership in the Senate asking for the Save the Internet Act, a bill that would restore net neutrality rules, to be brought up for a vote.

One letter, signed by more than 160 startups, was signed by tech companies like Medium, GitHub, Etsy, Patreon, Reddit, Shutterstock, Twitter, Vimeo, and Warby Parker. It was put together by Engine, a policy and advocacy organization supporting startups.

“Net neutrality has been critical to the internet’s explosive growth, creating an open platform on which companies large and small can grow,” the letter from the startups reads. “We urge members of Congress to stand on the side of consumers and Internet users to quickly pass a clean, unamended version of the Save the Internet Act. This bill would restore strong rules prohibiting blocking, throttling, and paid-prioritization while reinstating ex-ante enforcement and oversight by the FCC to prevent net neutrality-related harms from happening in the first place.”

It comes around the same time that a similar letter was signed by more than 100 public interest groups and internet rights groups including Center for Media Justice, Demand Progress, Fight For the Future, Free Press Action, and the National Hispanic Media Coalition. That letter, addressed to Senate Majority Leader Mitch McConnell (R-Ky.), called for a vote as well.

“The ​Save the Internet Act​ is the best chance to restore real net neutrality and an open and accessible internet for everyone in America​. We urge the Senate to move forward on this important bill that will restore strong open internet protections,” internet rights activists wrote.

The Senate majority leader has called the bill “dead on arrival” in the upper chamber after passing in the House of Representatives in April.

The flurry of action surrounding net neutrality on Tuesday is coinciding with the first anniversary of the Federal Communications Commission’s (FCC) repeal of net neutrality taking effect.

Fight for the Future is hosting an all-day live stream where a number of groups, and even members of Congress, will read comments from people about why net neutrality is important to them. A number of digital rights groups are also delivering petitions signed by millions of people to McConnell’s office on Tuesday.

Meanwhile, several Senators are expected to call on McConnell to bring the Save the Internet Act up for a vote during speeches on the Senate floor on Tuesday.