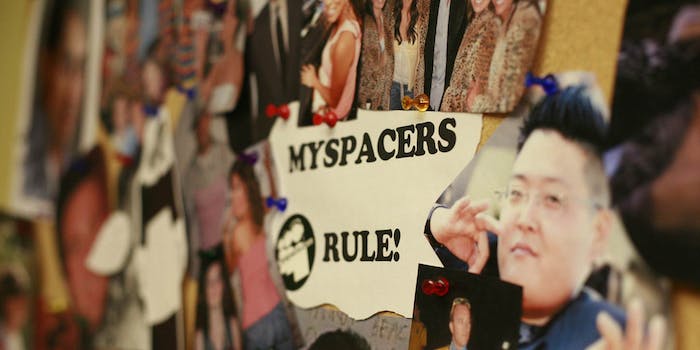 On the social media playing field, Myspace is the decrepit past-its-prime former champion getting lapped by newer, less gaudy upstarts. Myspace is a hollow shell of what it once was, despite numerous redesigns and Justin Timberlake-fueled attempts to rebrand. And though the new look is definitely a better one, an inventive one even, it’s failed to gain a new following, or lure back old users en masse.

So instead of trying to reinvent itself again, Myspace is now attempting to get us back into by sending former users their old, embarrassing Myspace shots. Expect some blurry bathroom selfies to show up in your inbox if you once trawled the social network.

There are several glaring flaws in this plan. First, who wants to be reminded they once thought taking a tilted-angle glamor shot with a toilet in the background was acceptable? And more importantly, many one-time Myspace users no longer have access to the email accounts they used to sign up. I signed up in 2003… I was using AOL at that time.

It’s easy to pick on poor Myspace for so thoroughly bumbling its chance at social media domination, but the website has made some legitimately interesting changes; its original music journalism is flat-out great. But sending vaguely threatening emails showing people gross pictures they posted when Tila Tequila was considered a social media powerhouse isn’t the best way to get eyes back on the site.