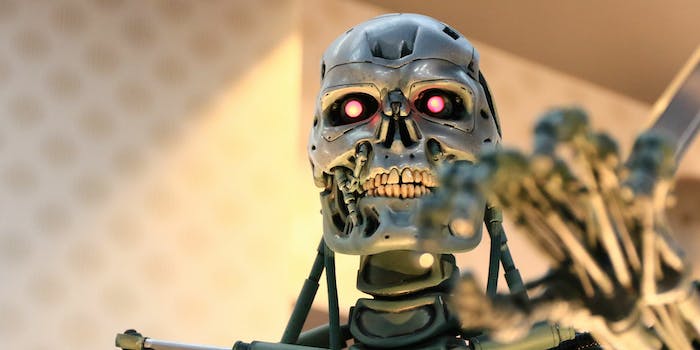 Regulations could help avoid a 'third revolution in warfare.'

Elon Musk and more than 100 other leaders in artificial intelligence and robotics are urging the United Nations to ban the use of autonomous weapons and help avoid the “third revolution in warfare.”

The open letter, penned by 116 founders of AI companies from 26 countries, warns of the potentially devastating effects of an arms race for weapons that can think for themselves.

“Once developed, they will permit armed conflict to be fought at a scale greater than ever, and at timescales faster than humans can comprehend,” the letter says. “These can be weapons of terror, weapons that despots and terrorists use against innocent populations, and weapons hacked to behave in undesirable ways.”

The letter was presented at the International Joint Conference on Artificial Intelligence in Melbourne on the same day the U.N.’s newly established Group of Governmental Experts on Lethal Autonomous Weapon Systems was scheduled to meet for the first time. The letter explains that the meeting was canceled “due to a small number of states failing to pay their financial contributions to the UN,” and pressed the intergovernmental organization to double its efforts at its rescheduled meeting in November.

The statement ends on an ominous note, “We do not have long to act. Once this Pandora’s box is opened, it will be hard to close.”

SpaceX CEO Elon Musk is among those who signed the letter, along with Mustafa Suleyman, founder of Google’s DeepMind. Musk’s involvement should come as no surprise. He’s become the unofficial figurehead of regulating the development of artificial intelligence, claiming it’s humankind’s “biggest existential threat” in a 2014 interview. In 2015, he founded the nonprofit organization OpenAI with Y Combinator President Sam Altman to encourage the creation of friendly AI and to neutralize the threat of malicious actors.

The Tesla CEO recently got into a war of words with Mark Zuckerberg over AI, claiming the Facebook founder had a “limited understanding” of the technology after Zuck called out AI “naysayers” like Musk in a live video stream.

You can read the full note at the Future of Life Institute page.