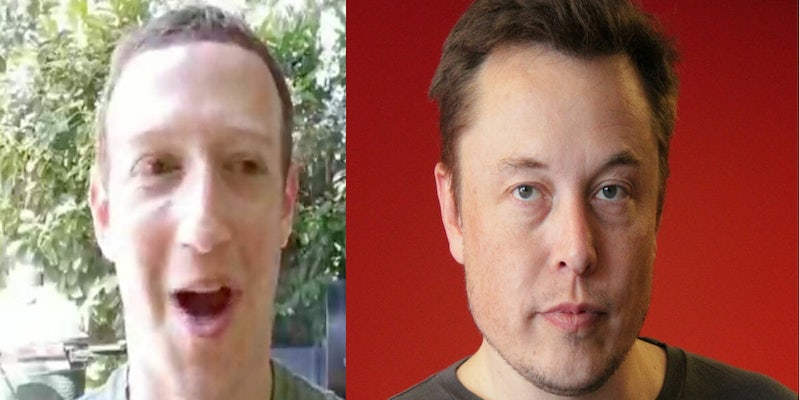 This could be the start of an epic feud.

A war of words between Elon Musk and Mark Zuckerberg is quickly escalating over the potential effects of artificial intelligence.

It all started when Zuckerberg broadcast a live Q&A session on Facebook. The business magnate answered questions from some of his more than 90 million followers, including a few about artificial intelligence.

Live grilling in my backyard.

“I watched a recent interview with Elon Musk and his largest fear for future was AI,” one fan commented around the 10-minute mark, “What are your thoughts on AI and how it could affect the world?”

Zuckerberg answered with his characteristically positive outlook. “I have pretty strong opinions on this. I am optimistic,” Zuckerberg said. “I think you can build things and the world gets better. But with A.I. especially, I am really optimistic. And I think people who are naysayers and try to drum up these doomsday scenarios, I just, I don’t understand it. It’s really negative and in some ways. I actually think it is pretty irresponsible.

While we can’t say for sure that Zuckerberg was speaking directly about Musk, we wouldn’t be surprised if he was. The SpaceX CEO has not shied away from discussing the potential risks of AI. Just last month, Musk told U.S. political leaders that AI poses an “existential threat” to humankind.

“I keep sounding the alarm bell, but until people see robots going down the street killing people, they don’t know how to react, because it seems so ethereal,” Musk said.

In 2015, Musk and Y Combinator CEO Sam Altman founded OpenAI, a nonprofit research company whose main goal is to work for a safer AI. In a video interview featuring the two CEOs, Musk said AI is the single biggest item in the near term to affect humanity.

“It’s important that we have the advent of AI in a good way,” Musk said. “That is something that, if you could look at a crystal ball and see the future, you would like that outcome. Because it is something that could go wrong, so we really need to make sure it goes right.”

A Facebook user uploaded Zuckerberg’s Q&A to Twitter with the headline “Zuckerberg blasts @elonmusk warnings against artificial intelligence as ‘pretty irresponsible,’” which prompted a response from Musk.

I've talked to Mark about this. His understanding of the subject is limited.

This isn’t the first time Musk hit out on Zuckerberg’s knowledge of AI. He had some choice words when asked about the “Jarvis” AI Zuckerberg created, “I wouldn’t call it AI to have your household functions automated. It’s really not AI to turn the lights on, set the temperature.”

This could be the start of an epic feud. Grab your popcorn.