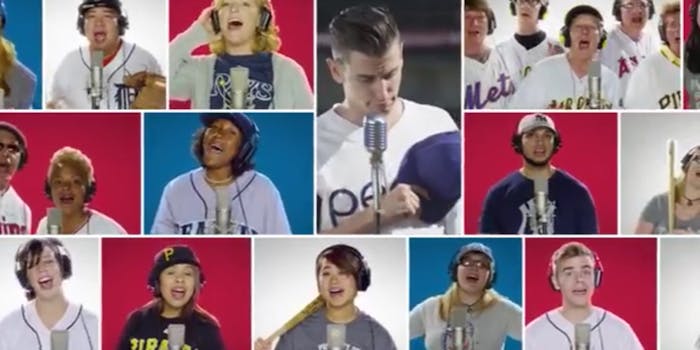 “Take Me Out to the Ball Game” goes viral.

Even if you’re not a baseball fan, it’s hard to ignore the theatrics of the World Series, which is currently in play. Of course, one of the major components of the series is advertising, and this year, Pepsi is trying really hard to be relevant again. So they enlisted popular YouTube star Mike Tompkins to help.

YouTube’s Maker Studios produced this clip for Pepsi, which features Tompkins, known for his a cappella covers, reinterpreting “Take Me Out to the Ball Game” at Wrigley Field. They crowdsourced the other fans who join Tompkins in an updated version of the song, the beat of which is created by using the sounds of a baseball game, and a handful of fans amped on Pepsi.

As Adweek points out, Maker Studios’ in-house ad team has had success using YouTube stars in branded videos. Pepsi is in the midst of another rebranding. It just hasn’t had much luck with a new “Pepsi Generation” that finds their soda to be a necessity, not a novelty. Maker Studios’ Maker Music channel spotlights some of YouTube’s most popular (and rising) stars. That’s a lot of sugary synergy, but can Maker help soda go viral?