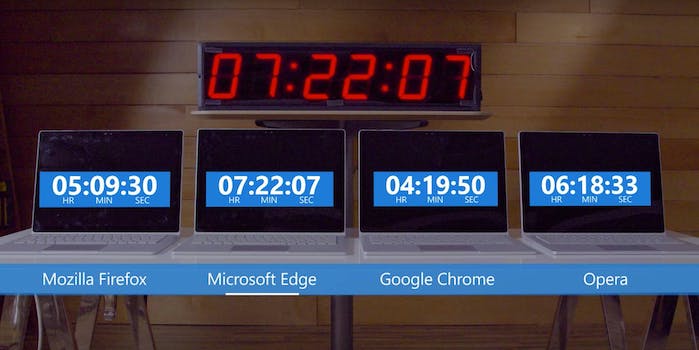 Microsoft is going hard after Google.

After years of being the laughingstock of internet browser makers, Microsoft is finally fighting back against its competition by illuminating just how bad other browsers can be on your battery.

The computing giant took aim at web browsers—Google Chrome in particular—in two rounds of testing designed to show just how much power is consumed by some of the most popular programs for surfing the web. The tests were crafted to compare battery life in a lab environment and in the wild while using Microsoft Edge, Google Chrome, Mozilla Firefox, and Opera.

The controlled test put to use a Surface Book connected to specialized power monitoring equipment that measured power usage during a variety of common browsing activities. The test took the browsers on a tour of the most popular sites on the web, including Facebook, Google, YouTube, Amazon, and Wikipedia.

Microsoft suggested that Edge—its Internet Explorer replacement for the Windows 10 era—produced between 36 and 53 percent more battery life than its competitors. Firefox fared the worst in the lab test, and while Chrome offered the closest performance to Edge, it wasn’t able to edge out Microsoft’s browser.

Facing the elements of real-world usage, Chrome ended up performing considerably worse than the controlled test suggested. Using aggregated data acquired remotely from a wide sampling of Windows 10 devices, Microsoft found that Chrome ate up nearly 55 percent more power than Edge. Firefox scored just behind Edge in this test, marking an interesting reversal in position from the lab test for it and Chrome.

To show off the results, Microsoft created a time-lapse video to show just how quick a battery drains to zero when using a given browser, which shows Edge outlasting its competitors by a matter of hours of additional usage—including a full three hours longer than Chrome.

Unsurprisingly, Microsoft’s own Edge browser wins in every example—if it didn’t, the company probably wouldn’t be sharing its findings. But it might be on to something: a 2015 browser performance test run by Digital Citizen produced similar results, crowning Edge as the best browser for battery life.

These findings aren’t the first time Chrome has come under fire for poor performance—it’s been knocked for its consumption problems for years now, and it’s not just on Windows, either.

A study conducted by portable battery maker BatteryBox in 2015 suggested that Mac users doing their browsing on Chrome were losing out on about an hour of battery life compared to Safari loyalists—though it’s worth noting that Apple policy doesn’t allow third-party browsers to access its secure video pipeline the way Safari does, which impacts performance on the operating system.

Google has been attempting to fix its browser’s tendency to drain devices. Last year, it released an update specifically aimed at improving efficiency and killed off auto-playing Flash ads. Still, many users have to rely on extensions and add-ons that cut back the resource-hungry browser’s consumption.

The team behind the browser has made improvements to power consumption in recent releases, a spokesperson for Google told the Daily Dot, and plans to continue to invest effort into it. The search giant claims to have made a 33 percent improvement in power consumption related to video playback on Windows 10 and believes that by Chrome 53, the browser will be at parity with other browsers. (Chrome is currently at version 51.)

Like Google, Mozilla appeared relatively unmoved by Microsoft’s findings. “We are confident that Firefox on average performs very well on Windows 10 devices,” a Mozilla spokesperson told the Daily Dot. “Performance that will actually be improving dramatically as we roll out new features over the next few months at the core of the Firefox technology stack.”

And of course, battery life isn’t everything when it comes to browsers. Internet Explorer long had a reputation for being a sieve when it came to security, and Edge unfortunately picked up the legacy when it was targeted early in its existence by a malicious trojan that was capable of stealing user passwords.

Earlier this year, Chrome surpassed Microsoft’s Internet Explorer as the most popular browser, marking the first time in 18 years a browser not made by Microsoft was the primary tool to access the web. As of May, more than 45 percent of people use Google Chrome to browse the web according to NetMarketShare.