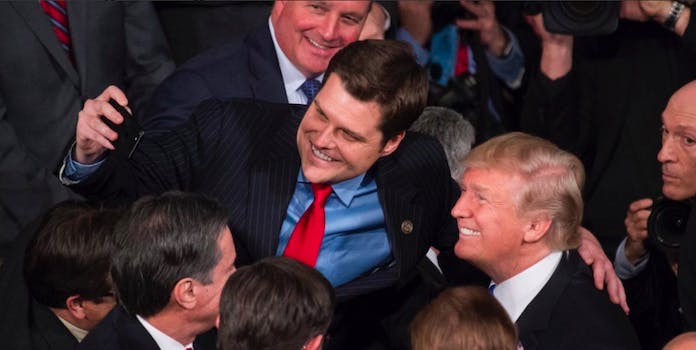 You might not have heard of him, but Congressman Matt Gaetz, a first-termer from the Florida Panhandle, is slowly becoming a leader of the militia of lawmakers in D.C. who almost always seems to align themselves with President Donald Trump.

Though he’s new to the swamp, Gaetz has become a chief figure in the faction of the Republican party that goes to bat for 1600 Penn. He’s constantly on television and often he’s on Fox & Friends. He talks to the president on a pretty regular basis, telling the New York Times “[the president] calls me frequently and shares his thoughts on my television appearances.”

A lot of political junkies are scratching their heads at Gaetz’s brash behavior and speculating what he plans to do with his pet-status from the White House and new popularity. It’s likely that he has his eyes on a high-ranking job in the Trump Administration as the president has been known to hire his favorite TV talent.

But Gaetz is also one of the more interesting low-level congressmen because he has spouted a series of abrasive and offensive statements while making some boneheaded moves. Here are a few of Gaetz’s greatest hits that may come back to haunt him as he tries to move up.

Who is Matt Gaetz?

Gaetz really stirred the pot when he invited far-right troll and Holocaust denier Chuck Johnson to be his guest at the 2018 SOTU. He told the Daily Beast that he only gave Johnson the ticket when he showed up at his office. The invite occurred during the moment that the national conversation centered around the Devin Nunes-FISA Memo but Gaetz said that he and Johnson didn’t discuss the controversial document.

Gaetz himself was instrumental in bringing the Nunes memo to the forefront, being one of the first congressmen to call for its release.

Johnson is a fringe figure but he’s known for doing some pretty despicable things. There was the time that he wrongly doxed a woman who he believed to be the subject of a Rolling Stone story about rape at the University of Virginia. Or the time that he published the home addresses of two New York Times reporters on his race-bating blog, GotNews.

In the end, the scandal blew over, Gaetz refused to apologize and the news cycle turned madly on. Though his offensive guest almost certainly endeared him to the far-right circles lurking on the nastier corners of the internet.

2) His behavior as a state representative was memorable

We should have known that Gaetz was all fire and fury in 2013 when he earned a profile in Slate, titled “Meet the Uncompromising Ideologue Chairing Florida’s ‘Stand Your Ground’ Hearings.”

In that piece, the left-leaning magazine showed Gaetz as a young, hungry politician fighting to uphold Florida’s “stand your ground” law in the wake of the Trayvon Martin shooting. He declared that “the only voices on ‘stand your ground’ are coming from the radical left.”

Those views didn’t do much outside of Florida, but in his home district, his frequent headlines made him a familiar name and when he ran for Congress in 2016, he beat the Democrat by 38 points.

3) He appeared on InfoWars

In January, Gaetz was a guest on InfoWars to talk about the Nunes Memo. During that appearance, he didn’t dive too deep into the show’s regular conspiracy theories but did suggest on a number of occasions that Hillary Clinton should be investigated.

Alex Jones ended the segment but saying “really impressed with what you’re doing.” Less than two months after Gaetz was on InfoWars, Jones peddled the conspiracy theory that the survivors of the Parkland school shooting were actually “crisis actors.”

Most politicians quietly backed away when Trump reportedly called a number of African nations “shithole countries.” But Gaetz charged forward.

During an interview on MSNBC, Gaetz remarked: “everywhere you look in Haiti, it’s sheet metal and garbage.” When host Chris Hayes asked Gaetz what he would say if somebody called Gaetz’s district a “shithole,” the congressman insisted that he could prove that his hometown is a nice place.

Gaetz’s district is a deep red territory, he won every single county that he governs in 2016. It’s a beautiful, rural area that borders Alabama on the north and the Gulf of Mexico to the south. The region is usually referred to as the “Redneck Riviera.”

5) His Twitter antics from the early years are hardly relaxed

Today, Gaetz’ Twitter feed is mostly clips of his regular television appearances. But as a young state representative, he was throwing punches everywhere.

Obama was a favorite punching bag. In 2014 he tweeted “Obama leads off with stories as real as my 5th grade Canadian girlfriend” and “on CNN track, women don’t like it when Obama goes all mean.”

In 2013, he quipped “yesterday I saw a lady at Publix use her “Access” welfare card. Her back was covered in tattoos. RT if u support entitlement reform #sayfie.”

In 2012, he joked “Think Team Obama is negotiating for a cigarette break during the next debate?”

The Mueller probe is a really controversial undertaking, but most seasoned politicians have been pretty hesitant to call Mueller out. Such a divisive issue is wise to fall silent on, as it could cost them valuable voters in November. Gaetz has gone all in on his attacks. And denigrating Mueller as a rogue deep state operative is a focal point of the Florida congressman’s frequent television appearances.

Gaetz even tried to get Mueller’s probe disbanded with a resolution and declared on the House floor “We are at risk of a coup d’etat in this country if we allow an unaccountable person with no oversight to undermine the duly elected president of the United States.”

7) He thinks there could be a secret cabal

Gaetz went full InfoWars during an appearance on CNN in which he speculated that there is a secret cabal with its teeth sunk deep into the upper echelons of the FBI. The conspiracy theory stems from text messages between two FBI agents and though their messages seemed a bit suspicious, they were only conspiratorial when taken out of context.

When Anderson Cooper asked Gaetz if he’s backed off that claim, the congressman said: “you may have had the very informal cabal working against the president.”

8) He voted for human trafficking, then defended his vote

In December, Gaetz was the only member of the House to vote against a bill aimed at combating sex trafficking. Then in a Facebook video, he defended his vote by saying “voters in northwest Florida did not send me to Washington to create more government.”

The vote also gave ammunition to Gaetz’ 2018 primary challenger, Cris Dosev; and fueled a press release which was widely quoted in the local Florida papers. It read, “that Matt Gaetz could vote against a law to fight human trafficking and sex slave trade is beyond comprehension. What was he thinking?”

During one appearance on Fox, Gaetz stated that the missing FBI text messages between two agents associated with the Mueller probe was “the greatest coincidence since the Immaculate Conception.”