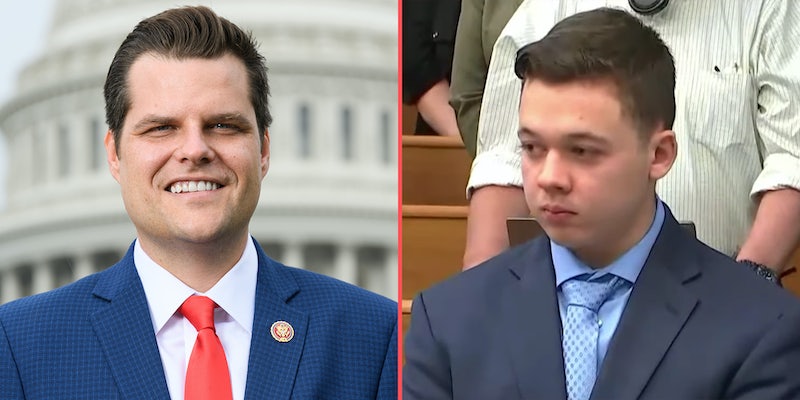 Gaetz said his office may reach out to him.

As the nation awaits the verdict in the Kyle Rittenhouse trial, Rep. Matt Gaetz (R-Fla.) is already envisioning a future where Rittenhouse gets off. And then comes to Capitol Hill to work for him.

That’s right. Gaetz wants Rittenhouse to come be his intern.

On Newsmax last night, Gaetz said that Rittenhouse deserves a “not guilty” verdict, and that he would make a “pretty good” congressionial intern.

Gaetz said his office may reach out to him, if he was acquitted.

Gaetz is no stranger to stunts like these. And if he is acquitted, given the notoriety of the trial, it seems like Rittenhouse’s best career path forward would be joining some sort of conservative political movement. So this probably will happen. He may end up running for Congress in a few years, when he’s eligible.

But right now Rittenhouse is 18, and Gaetz has a history with people around that age, as he’s still technically involved in an FBI investigation into his proclivities with underage girls.

Some thought the offer to Rittenhouse was just to see if he has any friends Gaetz could hook up with.

A verdict in the Rittenhouse case is expected any day now.