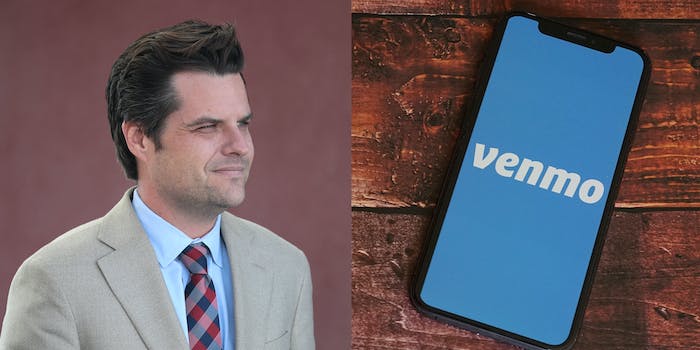 The report sparked 'Venmo' to trend on Twitter on Friday.

Rep. Matt Gaetz (R-Fla.) sent $900 on Venmo to a political ally who is an alleged sex trafficker, who then turned around and sent the money to teenage girls, the Daily Beast reports.

The Venmo transactions were made in May 2018, where Gaetz sent Joel Greenberg $900, which was then divvied up into three different transactions to young women over eight minutes the next morning.

Gaetz’s Venmo transactions come as the congressman is under investigation by the Justice Department into whether he trafficked a 17-year-old girl whom he was having a sexual relationship with two years ago. Gaetz denies the accusations.

Greenberg is reportedly close to a plea deal with the Justice Department.

According to the Daily Beast, Gaetz sent Greenberg two transactions on Venmo that amounted to $900. He captioned the first transaction “test” and the second one “hit up _____,” with the blank being a nickname for the teen that the news outlet did not publish.

Greenberg then sent the money to three women and labeled the payments “Tuition,” “School,” and “School,” according to the report.

As the Daily Beast was reporting on Gaetz’s public Venmo transactions, the transactions were made private.

On Friday morning, “Venmo” was trending on Twitter, with thousands of people online discussing the revelations from the Daily Beast’s report.

You can read all of the Daily Beast report here.