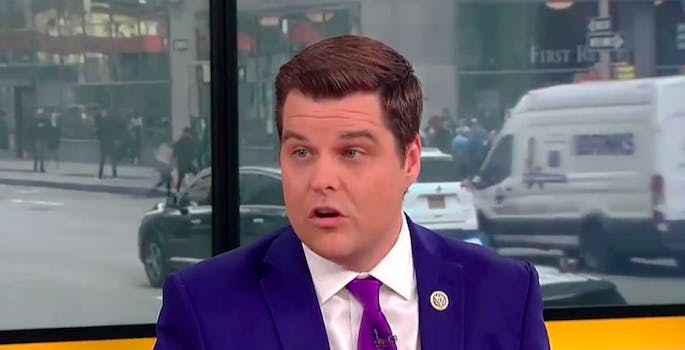 Why did Fox let this conspiracy-pushing congressman host a daytime show?

It's unusual to blur the lines between journalism and politics like this.

Rep. Matt Gaetz (R-Fla.) claimed he was co-hosting Fox News’ Outnumbered on Friday, a boast he made in a press release and on Twitter.

However, Fox said his claim of “hosting” was inaccurate.

Gaetz has been on several Fox News shows, but as he said, never on Outnumbered, which features four female hosts and “one lucky guy” as a guest host.

The panel discussed immigration and funding for a border wall.

Some on Twitter expressed concern about the overlap of Gaetz’s political duties and his hosting gig, particularly in the face of a government shutdown over the very wall he promoted on the show.

I'm a citizen of your district and you are embarrassing to NWFL. Stop trying to be Rush Limbaugh and just be our representative.

Sir, this is inappropriate. If we as a nation preach freedom of the press and journalistic independence, a sitting Congressperson shouldn’t host a news program. What if Maxine was hosting an MSNBC show or Steny Hoyer was hosting on CNN. You’d probably be (rightfully) outraged.

Are you being paid to be Congressman or a radio talk show host?

If only Matt cared as much about his day job — serving the folks of #FL01 — as he did about auditioning for TV.

Are you taking the day off without? You are a total embarrassment to the state of FL! Maybe you should discuss the dangers of driving while drunk while you are there!

Politicians regularly appear on cable news to comment on political happenings. They show up as guests on talk shows and late-night shows, too, but it’s almost unheard of for sitting politicians to host a program. And it’s especially glaring to bring Gaetz on a show in any capacity, as he has been known to use his Twitter feed to peddle inflammatory misinformation.

In a statement to the Daily Dot, Fox New’s Alan Komissaroff, VP of News, called Gaetz’s tweet “factually inaccurate” and said he was not hosting but rather appearing as a guest.

But it’s not the first time Fox has raised eyebrows blurring the lines between politics and journalism. Sean Hannity, a Fox News host and vocal supporter of President Donald Trump, campaigned alongside the president before the November 2018 midterm elections, causing concern among his fellow Fox News journalists.

Calls to Gaetz’s offices for comment were not returned by press time.