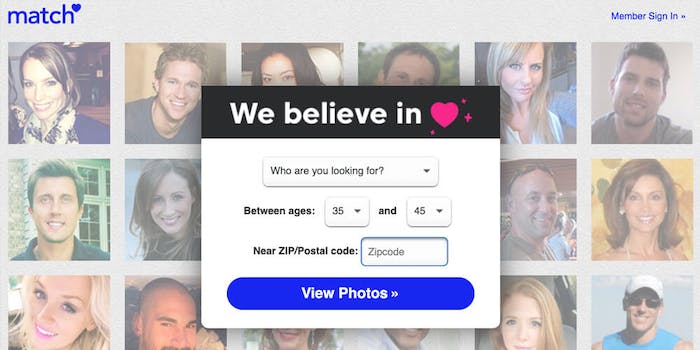 The FTC is suing Match.com for allegedly tricking users into paid subscriptions

'We believe that Match.com conned people into paying for subscriptions...'

The owner of online dating service Match.com is being sued by the Federal Trade Commission (FTC) for allegedly tricking users into signing up for paid subscriptions.

Match.com allows users to create accounts for free but only paying members can see who has liked their profile. The FTC alleges that Match.com sent emails and alerts to users urging them to upgrade to a paid subscription to see who favorited their account or messaged them even when the actions were carried out by scammers.

“We believe that Match.com conned people into paying for subscriptions via messages the company knew were from scammers,” said Andrew Smith, Director of the FTC’s Bureau of Consumer Protection. “Online dating services obviously shouldn’t be using romance scammers as a way to fatten their bottom line.”

To make matters worse, Match.com is accused of stopping alerts generated by suspected scam accounts once users agreed to upgrade to a paid subscription.

Between the dates of June 2016 to May 2018, the FTC adds, approximately 499,691 users purchased a Match.com subscription within 24 hours of receiving an email alert about a like or message from a fraudulent account.

Those users would then be exposed to the risk of fraud by communicating with the scam accounts.

In response to the lawsuit, Match.com vowed to defend itself in court against what the company called “outrageous claims” based on “cherry-picked data.”

Match.com also argued that the vast majority of fraudulent accounts on its platform are not run by scammers but by spammers and bots.

The FTC goes on to state that Match.com also made it unnecessarily cumbersome for users to access a promised free six-month subscription renewal and to cancel their accounts as well.