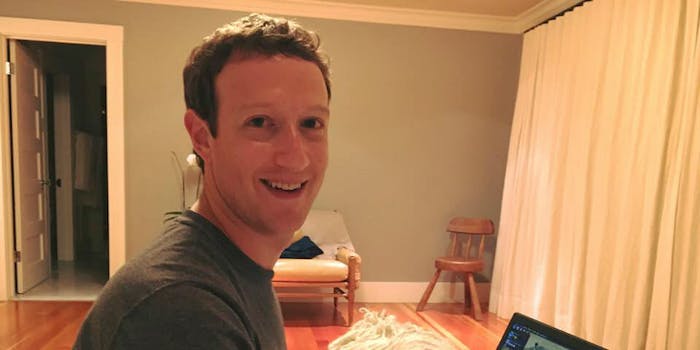 Before Facebook, there was ‘ZuckNet,’ the chat service 12-year-old Mark Zuckerberg built for his family

The Facebook CEO built a messenger for his dad's dental business when he was a middle school student.

Mark Zuckerberg showed off his college dorm room—the place where he would code the first versions of Facebook at age 19—in a video posted Tuesday. It turns out the child prodigy had some practice creating social networks long before stepping onto Harvard’s grounds.

The Facebook CEO talked about his first chat service and other inventions (including a computer game for digital snowball fights) on an episode of early-Facebook investor Reid Hoffman’s podcast Masters of Scale, according to Recode. He explained how he built a chat service called “ZuckNet” that allowed members of his family—including his dad who ran a dental business from home—to communicate with each other. He was 12 years old when he built the messaging service.

“Growing up, one of the neat things was that [my dad’s] dental office was actually connected to our home,” Zuckerberg said. “The dentists and hygienists needed to share data on the patients. So I built a system where he could communicate with folks across rooms, and also communicate with me and my sisters upstairs—and I called it ZuckNet.”

Now everyone is using Messenger and WhatsApp, two Zuckerberg-owned messaging platforms that each boast more than 1 billion users. That might not have been the case if Zuck had gone through with his original plan for Facebook.

“I didn’t mean to move out [to Silicon Valley],” Zuckerberg said. “Sophomore year is when I started Facebook. Dustin [Moskovitz], my co-founder at Facebook, and I wanted to get out of Cambridge for the summer, so we’re like, ‘All right, where should we go to work on Facebook?’ We’re like, ‘All right, let’s go to Silicon Valley. That’s this mythical place where all these companies come from.’ And I remember we explicitly talked about, one day, we might start a company—and this was after we’d started Facebook … [Facebook] was obviously not the company that we were going to create.”

Zuckerberg will give a commencement speech and receive an honorary degree from Harvard tomorrow. We hope he’s more enthusiastic than he was getting his Harvard acceptance letter.