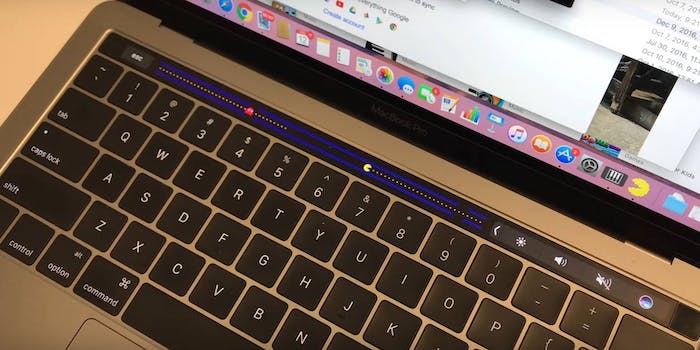 Perhaps it's not as big a gimmick as you might have thought.

The Touch Bar was Apple’s highlight feature during the October announcement of its new MacBook Pro lineup. The touchscreen shortcut panel was met with strong opinions, both positive and negative. Thankfully, software engineers found a use for the strip that we don’t expect will make anyone upset: the ability to play retro video games like Pac-Man, Doom, Lemmings, and Pong.

The Touch Bar was built as a digital replacement to a traditional keyboard’s shortcut row, or what is commonly the F1 to F12 keys. Its uniquely wide resolution of 2160 x 60 is certainly not meant for gaming, though we probably wouldn’t have said it was meant for DJing either.

Fortunately, classic video game titles are fun no matter how or where you play them, even if things are a bit trickier on the Touch Bar. To play Pac-Man, users tap on the laptop’s arrow keys to move the tiny Pac-Man character and escape the ghosts. To play Pong users slide their finger on the Touch Bar and hit the ball up into the screen.

None of the aforementioned games are approved by Apple for the App Store, so those interested in playing will need to download the software on Github.

Another intriguing Touch Bar application is that running T-Rex game that appears in the Google Chrome browser whenever there’s no internet. And if you aren’t as big on gaming, there is always this Nyan Cat to cheer you up.