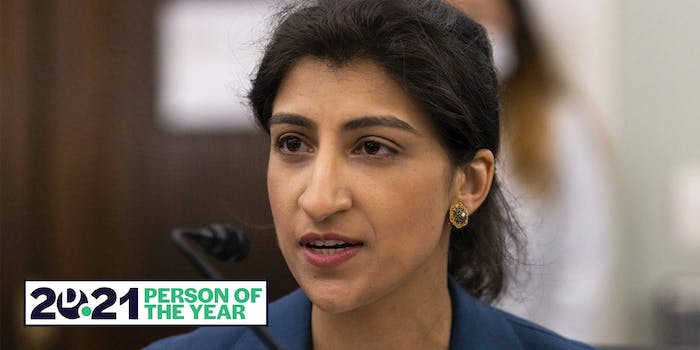 Lina Khan was the most influential person in the tech world in 2021.

Throughout 2021, it seems like something about big tech—from its impact on kids, to the issues surrounding data privacy, to how to police algorithms—was always consuming the oxygen in Washington, D.C. The words “big tech” seemed to always be echoing throughout the halls of Congress, the White House, and other parts of the capital.

Hearings were held, bills were proposed, and speeches were delivered. Big tech became ubiquitous with Washington, as lawmakers on both sides brought up their reasons for wanting to shake up the industry.

After years of calls, 2021 will be seen as the tipping point where big tech saw a reckoning: antitrust has become a popular idea, people are calling for more transparency and accountability, and the pandemic shined a bright light on the inequality and pervasiveness the internet has on our daily lives.

It remains to be seen what, if anything, Congress will end up doing about it. But one rare spot that has, and should continue, to make waves in tech policy is the Federal Trade Commission (FTC) under Chair Lina Khan.

Shortly after the 2020 election, there was a palpable desire from progressives for President Joe Biden to name Khan to the agency. Her background as a big tech critic with actual opinions on how to reign in tech giants like Amazon, Facebook, and others was celebrated. Her past work, like writing a Yale Law Journal article titled Amazon’s Antitrust Paradox in 2017, seemed like a perfect progressive fit for the agency, so much so that she was featured on a coffee mug of desired appointments along with Tim Wu and Jonathan Kanter (all of them were brought on by the Biden administration).

In many ways, Khan feels like a breath of fresh air in Washington: a person who knows what they want to accomplish and has an actual understanding of the space to make effective change. In a year that featured a lot of empty talking points in tech policy, there’s a real sense of optimism about what the agency can accomplish with her at the helm.

After being appointed chair of the agency in June, Khan wasted no time making an impact—both in terms of immediate actions and bringing optimism for more in the future. From rescinding vertical merger guidelines to being at the helm as the agency continues to push its monopoly lawsuit against Facebook, the FTC has moved to the center of regulation concerning tech giants.

But it is not just progressives who have taken notice: so have the companies.

Both Facebook and Amazon have pushed to have Khan recuse herself from issues that might come before the agency regarding them. Their attempts have so far been unsuccessful and lambasted by some lawmakers as an attempt to “bully their regulators” by the behemoth companies.

“I think that there’s been a real change ever since she has taken over as chair. For a long time, the FTC was a great agency in a lot of ways, but they kind of played it safe. They have constitutionally granted powers that they didn’t really use all that much, there was a lot of process, and kind of same-old-same-old,” Alex Petros, policy counsel at the advocacy group Public Knowledge, told the Daily Dot. “I view Lina as a character who has come in and shaken things up.”

That change could immediately be seen, Petros said. Under the last administration, the FTC filed a lawsuit against Facebook that alleged the social media giant had a monopoly over the market. Specifically, the suit looked at how the company “systematically” acquired companies like WhatsApp and Instagram that could be seen as threats.

But the suit ran into a roadblock in the summer. A federal judge dismissed the complaint without prejudice, leaving the door open for the FTC to amend it and move forward.

A few months later, the agency dove back in with what Petros called a “much stronger” complaint. Petros said, for example, past FTCs might have tried to make their case narrower or smaller. Instead, Khan’s FTC “brought in all this evidence of Facebook market power, additional documentation on their claims, and even a claim that the judge said he didn’t really buy, they left in there and fleshed it out a bit more.”

While Facebook made headlines throughout 2021 for its numerous missteps that attracted attention from Congress, the FTC continued to push through its already ongoing and consequential lawsuit against the tech giant.

“Lina has talked about how we should be bringing these … cases that aren’t slam dunks, and I view that as a real positive in that you want the FTC taking risks and pushing the envelope. She’s very much doing that,” Petros said. “That’s the kind of actions I’m really happy to see.”

Petros added: “It is a big, big change. Obviously, a Republican to a Democrat is going to be a change. But this is the biggest change we’ve ever had, really. She’s very different than former commissioners.”

‘Advocates know they have an advocate as the chair’

While the Facebook case has—not shockingly—received the most attention, there’s other avenues the FTC could explore moving forward. There’s a growing hope that the FTC will be aggressive with rulemaking.

The agency has the power to set industry-wide regulations—and many of the ills of big tech like privacy violations, data abuses, discrimination with data, and more—suddenly feel like they could be tackled, potentially improving life for millions.

Both advocacy groups and even members of Congress have called on the FTC to use its rulemaking authority to make sweeping changes in big tech, a power that Petros said had grown “dormant over time.”

The areas that rulemaking could make an impact could potentially touch all kinds of points in the tech space, Justin Brookman, the director of consumer privacy and tech policy at Consumer Reports and a former FTC official, told the Daily Dot.

Brookman noted that there could be rulemaking efforts in competition, privacy, influencer marketing, scams, or data abuses.

“On privacy, there’s obviously been an obvious societal interest in this, and a lot of congressional interest—although no one is holding their breath for legislation solution any time soon, at least at the federal level,” Brookman said, later adding: “Advocates know they have an advocate as the chair. That’s her background.”

There’s substantial interest in addressing the problems. Over the last year, the FTC has been asked by advocacy groups—and even members of Congress—to use its rulemaking authority to address all kinds of big tech abuses. An executive order from Biden in early July also urged the agency to use its rulemaking authority to address “unfair data collection and surveillance practices that may damage competition, consumer autonomy, and consumer privacy.”

Over the summer, a coalition of more than 50 groups asked Khan and the FTC to address “unfair and deceptive” data collection practices by big tech companies, including banning corporate use of facial recognition, surveillance in public, and “unfair data collection and surveillance practices that may damage competition, consumer autonomy, and consumer privacy.” Similarly, other groups have urged the FTC to crack down on surveillance advertising, where companies track customers for the purpose of selling ads.

Meanwhile, several Democratic senators urged Khan to use the FTC’s rulemaking authority to address how consumer privacy in the country has become a “consumer crisis.”

But it hasn’t just been outside voices, Khan has signaled changes are on the horizon. Besides the Facebook monopoly suit, she has told the FTC staff that the agency would make addressing “rampant consolidation” one of its top priorities, and would need to find ways to strengthen its merger enforcement.

The agency has also pledged to combat dark patterns, deceptive tactics that are intended to trick users as they try to unsubscribe or opt-out of things online, and warned more than 700 companies across various industries that fake online reviews and deceptive endorsements could lead to hefty fines.

While a lot has happened in just a few months, experts said there’s more to come—especially once Alvaro Bedoya, a public interest advocate who was nominated by Biden to be the agency’s fifth commissioner and give Democrats a majority at the agency, is finally confirmed. That majority would allow them to tackle issues that would require a party-line vote.

Khan’s FTC has set the stage for seismic changes in big tech. She’s inspired optimism for those who want change and scared companies into trying to force her out of the way. There’s a long list of problems with big tech, and if 2021 was any indication, Khan and the FTC won’t be waiting to tackle them.