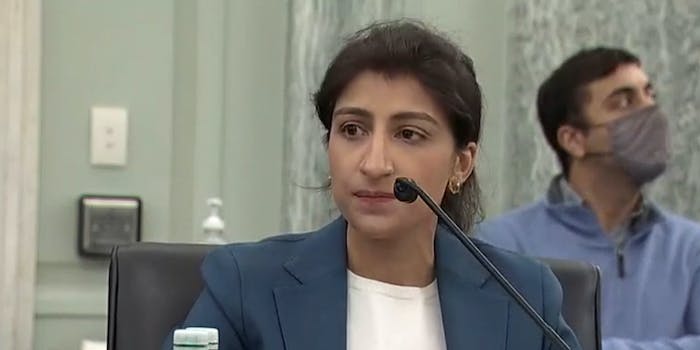 She has support from progressives, and says she'll focus on 'rampant consolidation.'

The Federal Trade Commission (FTC) will make addressing “rampant consolidation” one of its top priorities, the agency’s chair Lina Khan said in a memo to the agency’s staff and commissioners.

The memo laid out Khan’s vision and priorities for the FTC moving forward. It was sent out earlier this week. Within it, Khan—a critic of big tech companies who has support from progressives—said the agency would need to find ways to strengthen its merger enforcement and focus on “scrutinizing dominant firms, where lack of competition makes unlawful conduct more likely.”

Khan did not name big tech companies like Amazon, Facebook, and Google directly, but did say that the FTC needed to address “rampant consolidation and the dominance that is has enabled across markets.”

Earlier this month, the agency released a report regarding smaller mergers from Amazon, Apple, Facebook, Google and Microsoft. At its public meeting, Khan said the FTC needed to identify loopholes that allowed the acquisitions to “fly under the radar,” according to CNET.

“Given the ongoing merger surge, there is a real risk that markets will become only more consolidated absent our vigilance and assertive posture,” Khan wrote in the memo.

Overall, Khan said the FTC will take a “holistic approach” to “identifying harms, recognizing that antitrust and consumer protection violations harm workers and independent businesses as well as consumers.”

She added that the agency needed to be “forward-looking” in anticipating issues in both competition and consumer protection.

“This means being especially attentive to next-generation technologies, innovations, and nascent industries across sectors,” Khan wrote. “Timely intervention—be it checking anticompetitive conduct that would lead markets to tip, or targeting unfair practices before they become widely adopted—can help us tackle problems at their inception, both limiting harms and saving resources over the long term.”