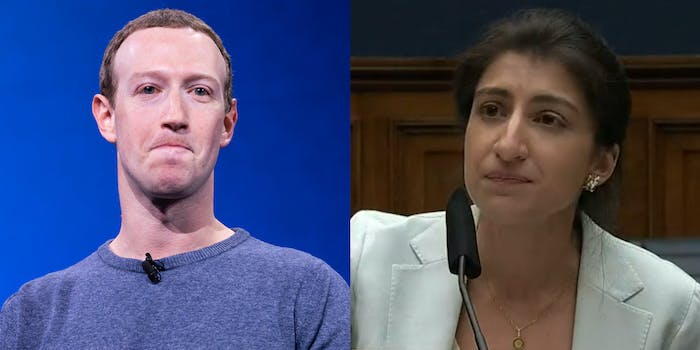 They keep trying to have her recuse herself.

Facebook won’t stop trying to get Federal Trade Commission (FTC) Chairwoman Lina Khan to recuse herself from the agency’s monopoly lawsuit against them.

The social media giant, which recently rebranded under an umbrella company called Meta, asked the U.S. District Court for the District of Columbia in a court filing on Wednesday to dismiss the FTC’s complaint. In the court filing, the company also once again argued that Khan, a big tech critic who has drawn rave reviews from progressives, should recuse herself from the suit.

Over the summer, the agency filed an amended complaint against Facebook—its original complaint was rejected by the court, but it was given time to amend it—where it alleges that the company has “maintained its monopoly position” by “systematically” acquiring “companies that it viewed as serious competitive threats.”

In the amended complaint, the FTC also noted that “no other personal social networking provider in the United States remotely approaches Facebook’s scale.”

Facebook pushed back in its court filing on Wednesday, saying that the FTC didn’t “plausibly establish” that the company “maintained a monopoly through unlawful, anticompetitive conduct.” It asked the court to dismiss the complaint with prejudice.

In the court filing, Facebook also once again argued that Khan should recuse herself, saying that her not doing so will “taint all of the agency’s litigation choices in the event the case proceeds.”

The request is nothing new for Facebook. The social media giant has repeatedly tried to have her recuse herself from the cases related to it.

In July, Facebook joined Amazon in calling for her to recuse herself from antitrust cases. Then, in October, the company once again told the court she should recuse herself because she was “biased” against them because of remarks she made before joining the FTC.

Big Tech’s recusal calls have been criticized by lawmakers, who over the summer said Facebook and Amazon’s attempts were the two trying to “bully your regulators.”