'We realized the last thing we thought the world needed was another app.'

Phones have been changing the way we communicate, but a new crowdfunded project aims to make an impact on how we interact with one another by doing something different: making us live in the moment with the people around us.

The Light Phone is, in many ways, a reactionary counterbalance to the world smartphones built. While smartphone screens are growing larger, Light Phone has the thin, stubby build the size of a credit card. While your current phone dies in your pocket midway through the day, Light Phone lasts 20 days on a single charge. 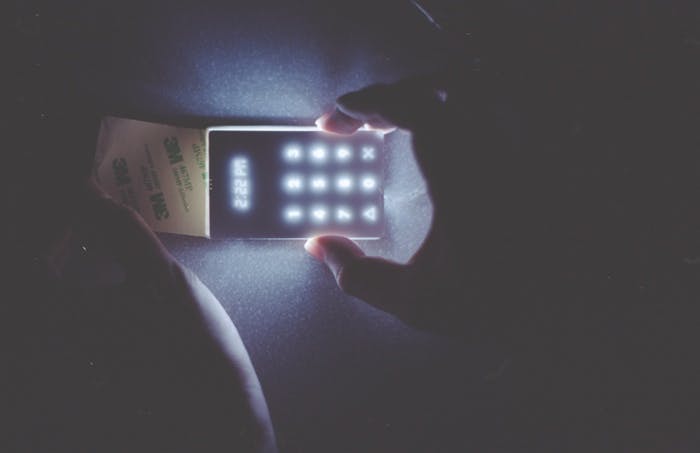 Most importantly, while your smartphone keeps you connected to your friends in every way possible, Light Phone is meant to be used sparingly and for voice calls only.

Joe Hollier and Kaiwei Tang, the creators of the minimalist phone, first met in Google’s 30 Weeks incubator. Tang, who had a background in phone building, told the Daily Dot, “When we were doing human centered design research and studying how people relate to technology we sort of freaked ourselves out. We realized the last thing we thought the world needed was another app.”

The two designers decided instead of building another way to connect—which actually doubles as another tether to the device in your pocket—they wanted to build something that would help people disconnect. In this sense, the Light Phone serves as a symbol; it’s a reminder to look up from the screen every now and then and enjoy the real world.

But Light Phone isn’t just a pocketable reminder to pay attention to the real world—it’s a functional device. “There are lots of ways we see the Light Phone being used, and it’s exciting,” Tang said. “We started off by building it to encourage people to disconnect for a break, whether that spending an afternoon in solitude at the park or sharing the undivided attention of your spouse at dinner.”

While the Light Phone is its own phone and comes pre-loaded with 500 minutes of talk time, users will be able to download an app on their primary device to forward calls through Light Phone, essentially turning into an extension of the smartphone.

With simple and durable design, speed dialing option, and built-in flashlight, it’s a survivalist’s dream device as well as an ideal emergency line or backup option for when your phone inevitably dies because you just had to get to the next level in Clash of Clans.

“We want to make the experience of disconnecting feel special”

Tang explained the idea of Light Phone isn’t to completely remove a line of communication from people’s lives, but instead to wean them off the excessive parts they engage too heavily in.

“We want to make the experience of disconnecting feel special so that it inspires people to do things without their phone on purpose,” he said. “We think the breaks will make people not only more relaxed but a lot more productive when they decide to reconnect.”

Even in creating Light Phone, Tang and his collaborator found themselves dealing with philosophical questions about utility versus distraction when it comes to smartphones. “We are ‘the anti-smartphone,’” he said, but noted, “we both use smart phones all of the time, we just think like all things in life there needs to be a balance.”

It’s hard to argue against the utility of smartphones, especially to people who count on them every day for work and communication, but there is plenty of evidence to suggest multitasking isn’t as effective as we’d like to imagine. A study published by the American Psychological Association suggests multitasking serves mostly to add extra time to completion and cut into productivity. The Proceedings of the National Academy of Sciences (PNAS) even notes in a study that people who believe themselves to be good multitaskers are generally lousy at actually multitasking.

The Light Phone also addresses an often ignored point of stress when it comes to smartphones: the inevitably of obsoletion. In most cases, your smartphone, even if it just hit the market, will be surpassed by another device within months and be replaced completely within a year. Not so with Light Phone.

“One of our favorite things about the phone is that we won’t just come out with a version 2 in a year that makes this Light Phone obsolete,” Tang explained. “The Light Phone will continue to work with your smart phones in the future and won’t need to be upgraded every year.” Just install the app on your new device, load up on more minutes for the Light Phone, and keep on your with your now more fulfilled life. That’s a pretty good value for a $100 device.

Now you just have to find friends who won’t be weirded out by how much eye contact you’ll be making with them.