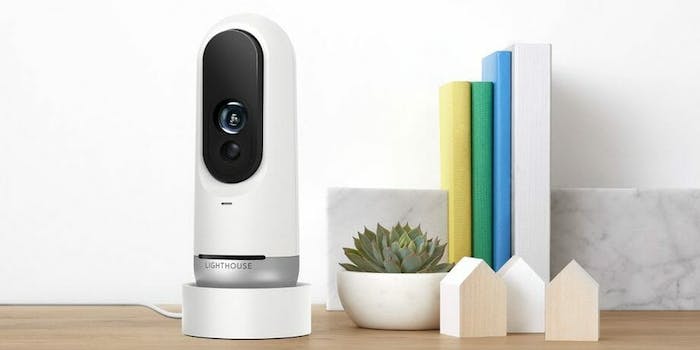 You can teach Lighthouse to recognize who family members and trusted guests are—including pets.

There are dozens of smart security cameras out there that can monitor every aspect of your home while you’re away. But the team behind Lighthouse, the latest security cam newcomer, thinks its product is going beyond the competition. Lighthouse is a smart home camera that doubles as an “interactive assistant.”

Lighthouse uses “deep learning algorithms” to understand not just who typically comes in and out of your home on a daily basis, but when, where, and how often. The dome-shaped device has a built-in RGB-D camera that uses 3D sensing as well as pattern, object, and facial recognition.

From its companion mobile app, users can teach Lighthouse to recognize who the family members and “trusted guests” are—including pets. From then on, the app can alert you when one of them enters or leaves the house, or if an unidentified intruder is present.

The app’s voice recognition system can respond to a variety of questions and commands. If you ask, “What did the kids do while I was out today?” the app can pull up the last video the camera shot of your kids. Since it learns from your family’s typical behaviors and keeps track of furry friends, you could also use it to find out if someone walked the dog or not.

Tracking your family is one thing. But tracking persons, their whereabouts, and their activities sounds like prime fodder for a tech-savvy hacker or thief. To protect your security, Lighthouse uses bank-level encryption and authentication techniques. User data is also only viewable by the user themselves (unless law enforcement requested the data, the Verge reports). However, video footage is only stored for 30 days before being permanently deleted.

At the very least, Lighthouse sounds like a comparable competitor to the Nest Cam. If it succeeds in its “interactive assistant” mission it could be a whole lot more.