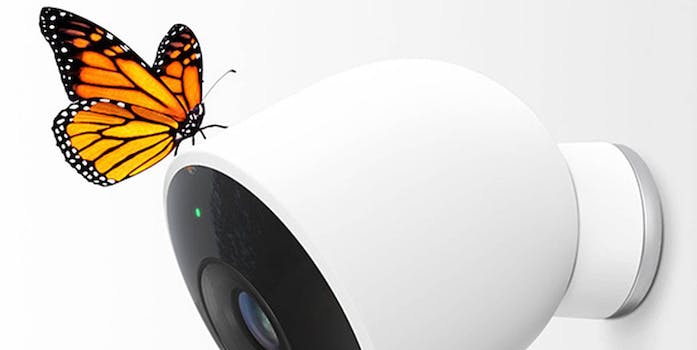 The Nest Cam Outdoor is a $199 weatherproof home security marvel

Looking for a home security camera that can beat the worst weather? Nest has a solution.

Have you wanted to add a camera to your property for home security, but been worried intemperate weather might accidentally kill your investment? Nest has you covered, with the introduction of their new Nest Cam Outdoor, a camera model that works just like the old Nest Cam only without the worry that Mother Nature will murder it.

Because the Nest Cam Outdoor is wired, the camera is always on, meaning that unlike battery powered security options trespassers won’t have to activate a motion detector before they’re filmed. Beyond the “always on” feature Nest Cam Outdoor offers all of the added goodies of a normal Nest Cam, like the ability to record audio and a two-way talk function that allows you to ask strangers why they’re at your door or in your yard.

While the camera is powered by a 25 foot long chord, don’t worry about burglars slipping past by sneaking past and cutting it. According to Venture Beat the camera features a security feature that will alert you on your phone if the camera is unplugged, including showing you the last images it recorded.

Whether you’re worried about home security or just trying to catch animals doing cute things in your yard the Nest Cam Outdoor is an affordable security option at $199. You can pick one up when it launches this September.