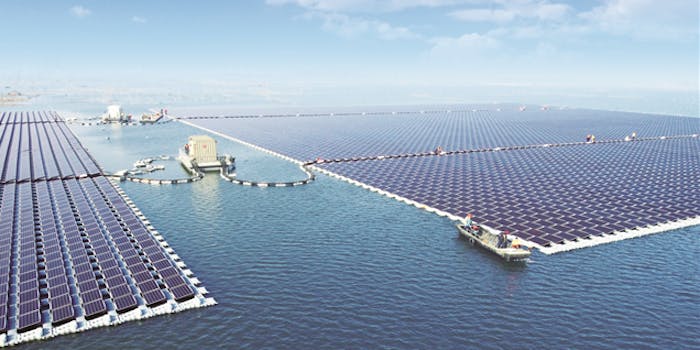 China promised to spend $360 billion on renewable energy by 2020.

The largest floating photovoltaic power plant on Earth is up and running in China.

The massive grid of solar panels rests on top of a flooded former coal-mining region in Huainan, a prefecture on the east coast of China between Shanghai and Beijing. The lake was formed by a long period of heavy rain, and now sits at a depth between four and 10 yards.

Ironically the 40-megawatt facility might not exist if not for coal mining, which caused the land to gradually subside and created a vessel for the lake to form.

Solar panels can be placed anywhere, but putting them on top of water offers several benefits. By covering the water, the panels can reduce evaporation from reservoirs, and because the water cools surrounding air, it can increase the life of a solar panel, and even improve efficiency. Solar cells tend to wear down when exposed to warm temperatures for long periods of time. Floating solar farms are also becoming more popular because they free up land in populated areas.

China is embracing renewable energy in a big way. The country promised to spend at least $360 billion on renewable energy by 2020. It plans to create 13 million jobs and significantly reduce its greenhouse gas emissions. By 2030, China pledged to increase the amount of energy it receives from non-fossil fuels by 20 percent.

According to a Bloomberg report, solar energy could become cheaper than coal almost everywhere in the world by 2025. The average 1 megawatt-plus solar system will cost 73 cents a watt by 2025 compared to $1.14 today, a 36 percent drop, said Jenny Chase, head of solar analysis for New Energy Finance.