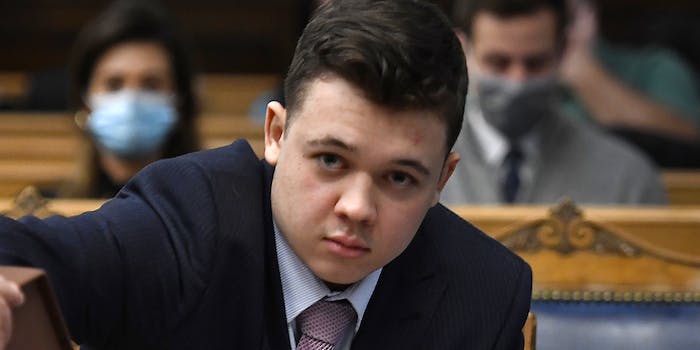 The jury in the Kyle Rittenhouse trial is currently deliberating. Rittenhouse is accused of murdering two men and attempting to murder a third during widespread unrest following the police shooting of Jacob Blake in Kenosha, Wisconsin last year. Rittenhouse has pled not guilty by reason of self defense.

The case has catalyzed partisan divisions nationwide. Conservatives have lionized the teen for defending the community from rioters. Liberals have portrayed him as a vigilante playing cop. The divide is unlikely to be bridged by his acquittal or conviction.

Conservatives online are already making excuses for why he may ultimately be convicted. They believe that if he’s found guilty, it will be because the jury is biased. Earlier this week, the Daily Dot reported that some were doxing and threatening a man who wasn’t even on the jury and claiming he was biased against Rittenhouse.

Yesterday, online provocateur Jack Posobiec started a rumor of his own. On Twitter, he claimed that two jurors are holding up the case because they fear backlash. Posobiec said that his source is a United States Marshall in Kenosha.

They’re “worried about media leaking their names, what will happen to their families, jobs, etc.” he added in subsequent tweets, “including doxxing [sic] threats from ‘anarchist groups.'”

Numerous people pointed out that jury deliberations are secret and jurors are prohibited from discussing the case with anyone outside the jury pool. Also the case is in state court, not federal, so it’s not clear how a U.S. Marshal would be privy to such information.

Some accused Posobiec of lying outright. “Of all the things that never happened, this never happened the most,” one person replied to his tweet.

But the horse was already out of the barn. Right-wing conservatives made haste to declare that the case should end with a mistrial or acquittal. “Mistrial” trended on Twitter Wednesday morning.

Others circulated alternate theories as to why the jury should find Rittenhouse not guilty or the judge should declare a mistrial.

“The problem is the prosecution gave the defense a compressed version of the video,” the motion states. “What that means is the video provided to the defense was not as clear as the video kept by the state.”

This, some on right-wing Twitter argued, amounts to prosecutorial misconduct.

Other, wilder theories circulated. One even argued that “a couple radical Biden BLM supporters made it on the jury and caused a mistrial,” referring to President Joe Biden and the Black Lives Matter movement.