Trump has no plans to prosecute Hillary Clinton, aide says

“I think when the president-elect, who’s also the head of your party, tells you before he’s even inaugurated that he doesn’t wish to pursue these charges, it sends a very strong message, tone, and content” Conway said.

Conway, former campaign manager for the Trump campaign, added that “things that sound like the campaign” are not a priority for Trump. Clinton, she said, “still has to face the fact that a majority of Americans don’t find her to be honest or trustworthy. But if Donald Trump can help her heal then perhaps that’s a good thing.”

During the second presidential debate in early October, Trump threatened Clinton: “If I win, I am going to instruct my attorney general to get a special prosecutor to look into your situation,” he said.

Trump was widely criticized for threatening to imprison his fellow candidate and for planning to abuse the executive authority of the White House, drawing some comparisons to totalitarian rulers. 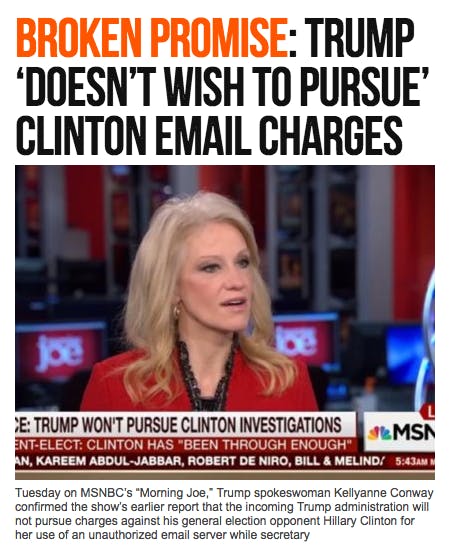 The news did not settle well at Breitbart, the right-wing website cofounded by Trump’s chief advisor, Steve Bannon, who has been under fire this week for offering up the site as a platform for the “alt-right,” prominent members of which are neo-Nazis who have expressed a desire to transform the United States into a white ethno-state through the use of mass deportations and enhanced border control.

Watch the full interview with Kellyanne Conway at MSBNC.