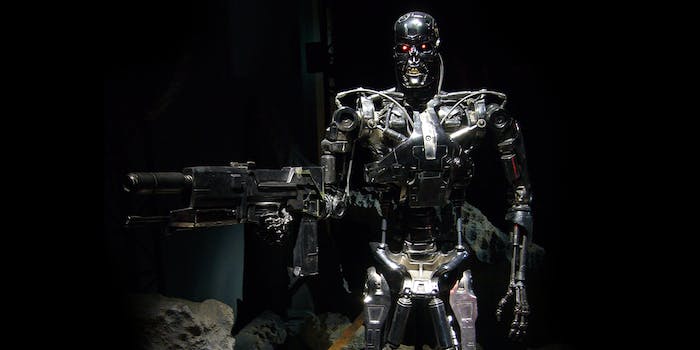 Killer military robots from Norway can terminate you at will

Not every robot that's armed with missles is cute and cuddly.

Flying killer robots may soon start targeting people by themselves. You read that right: Someone has invented a weapon designed to kill people without human input.

The JSM, a missile reportedly capable of evading incoming fire with sharp aerial maneuvers, is being produced on order from the Norwegian Armed Forces. Reports say that a number of countries, including South Korea, Japan and the United States, have been pitched to purchase the weapon system. Last June, the Australian Royal Air Force reportedly showed interest as well, according to Business Insider, in equipping their fighters.

For now, it’s unclear whether the so-called killer robots will have the capability to transform into other types of vehicles, like Mack trucks or dinosaurs. It seems an inevitability, however, that the autonomous weapons will be deployed onto flying drones afflicted by a conscious malware that may or may not be the incarnation of Skynet.

Naturally, if you want a joint strike missile, you’ll need a plane to strap it to. Enter the F-35 Joint Strike Fighter, “one of the most expensive conventional weapon systems in U.S. history,” according to Breaking Defense. At one point, the fighter was estimated to cost up to $1.1 trillion for development and operation over a 55-year lifespan (although that figure has been controverted by Lockheed Martin executives).

On the F-35, defense journalist Colin Clark wrote at Breaking Defense, that industry experts are most excited by the fighter’s unprecedented ability to confuse enemies and attack their electronics systems. “Think Stuxnet,” he wrote.

“Remotely controlled solutions for demanding civilian and military tasks have become increasingly more important during the last years,” a spokesperson for Kongsberg said, in response to the killer robot controversy surrounding JSM. “The Norwegian high-tech industry needs to join this development.”

In July, Raytheon and Kongsberg announced a partnership to compete for a $1 billion U.S. Navy contract for its Offensive Anti-Surface Warfare program, which seeks to replace the Harpoon anti-ship missile commonly deployed on the F/A-18 Hornet strike fighter.

“From the government side we are very pleased they maybe can sell it to more countries,” Norwegian Air Force Lt. Col. Sigurd Fongen, who oversees F-35 operations, told reporters.

Testing on the JSM system will reportedly begin next year, with hopes it’ll become fully operational by 2025. At least now we have a date for the robot apocalypse.