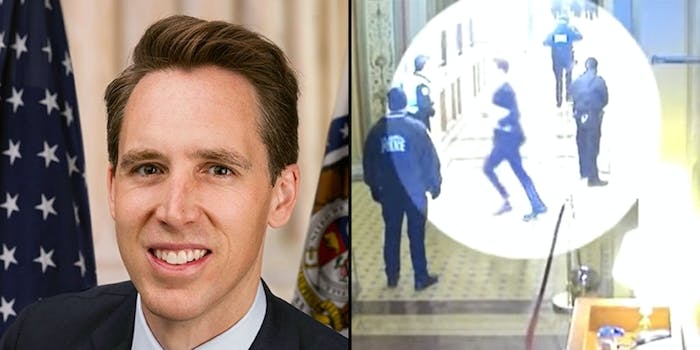 ‘Faster than Forrest Gump’: Video of Josh Hawley fleeing Capitol rioters after riling them up gets memed

Newly released security camera footage of Sen. Josh Hawley (R-Mo.) running away from rioters in Capitol building on Jan. 6 has led to an influx of memes across social media.

The video was shown on Thursday during the latest hearing from the Jan. 6 Committee, which noted that Hawley had riled up protesters earlier in the day by raising his fist in solidarity while outside of the Capitol.

The fact that Hawley would later run away from the very protesters he helped incite was met with both condemnation and mockery. Hawley’s name also became a top trend on Twitter after users began to remix the video.

One viral Twitter thread showed multiple versions of the video set to iconic songs such as “My Heart Will Go On” by Celine Dion and “Born to Run” by Bruce Springsteen.

Video of those in attendance at the hearing went viral after the crowd could be heard bursting into laughter at the sight of Hawley running.

Additional references were made to James Cameron’s 1997 blockbuster hit Titanic. Hawley was compared specifically to Caledon Hockley, a character played by Billy Zane, who lied his way onto a lifeboat.

“Exclusive photo of Josh Hawley on the Titanic,” another user quipped.

Hawley’s name trended on Twitter well into Friday as more and more memes flooded the internet.

Despite the backlash, Hawley appeared to indirectly respond to the criticism on Friday by tweeting out a link to a coffee mug that featured an image of his now-infamous fist gesture to protesters.

“Needs a lid for when you’re on the run,” replied someone.