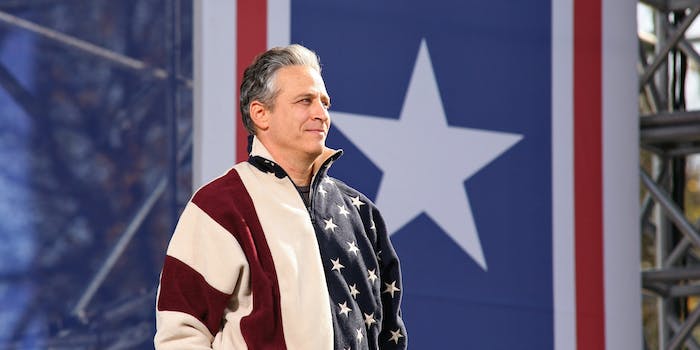 He kept it under wraps, but now he needs help from other TV shows.

Jon Stewart is urging the television industry to support the troops after they return home by giving them jobs.

For the past three years, the Daily Show host and his staff have put together a five-week crash-course program that aims to educate veterans about how their show works. It’s essentially an internship designed for veterans with full-time jobs, and it ends with a job fair that connects the veterans to industry job scouts.

While Stewart has been a long time critic of the Iraq War, he has been nothing but supportive of the troops. When the mentoring nonprofit American Corporate Partners  asked him to help a veteran in 2013, he agreed, but he wanted to go bigger than simply name-dropping them.

In an interview with the New York Times, Stewart noted that veterans have trouble breaking into the TV industry because they often lack the early experience of fellow job-seekers who went to college, scored internships, and networked within the industry. Veterans were serving their country during the years when they’d normally be doing those things.

Stewart kept his program under wraps to avoid looking like he was trying to score points by waving the flag. While he and his staff reached out to veterans’ groups to look for veterans who were interested in the program, they never mentioned The Daily Show.

Why is Stewart talking now? Because The Daily Show is ending in August, and he wants other TV shows in the industry to take up the mantle and create programs modeled on his.

“This is ready to franchise. Please steal our idea,” Stewart told the Times. “It isn’t charity. To be good in this business you have to bring in different voices from different places, and we have this wealth of experience that just wasn’t being tapped.”

Some of the veterans who graduated from Stewart’s internship program found work in the industry, including some who now work for Stewart himself. Justine Cabulong, one of his warm-up comedians, is a former Marine lieutenant who served in Afghanistan. Nathan Wilmer, an associate field segment producer for the Daily Show, also worked at Fox News after graduating from his program.

“It was actually inspirational,” Wilmer said. “We hear ‘Thank you for your service’ all the time, but here was concrete action, people working to really make a difference. And it changed lives. I’m proof of that.”