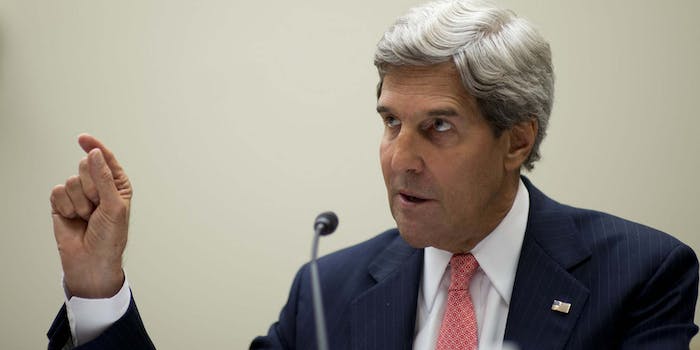 "The freedoms that we seek in the virtual square and public square are absolutely one and the same."

Speaking to an audience in one of the most technologically sophisticated regions in the world, U.S. Secretary of State John Kerry said Monday that freedom on the Internet is analogous to freedom in real life.

Kerry’s did not target his remarks at a Silicon Valley crowd or even one in startup-happy Israel, but rather a congregation in Tallinn, Estonia, at the Freedom Online Coalition Conference. The nation’s top diplomat, who spoke remotely via Google+, told the crowd that access to the Internet is a “fundamental kind of right.”

“The internet has linked us all in a human chain that spans the globe, and the freedoms that we seek in the virtual square and public square are absolutely one and the same,” Kerry said. “We need each stand for an open, secure, and inclusive Internet.”

Throughout the 17-minute speech, Kerry singled out nations such as Russia, Venezuela, Syria, and Egypt as regions where the battle for freedom from oppressive governments has spilled over onto the Internet in recent years.

Estonia was, for several reasons, the perfect platform for Kerry’s technologically-themed diplomacy. Since it broke with the Soviet Union in 1991, the tiny Eastern European nation has been regarded as a shining example of how technological advancement can benefit a nation. The country consistently scores well on Freedom House’s annual “Freedom on the Net” rankings, and it is a key ally of the U.S. when it comes to cyber security.

“Estonia ranks among the most wired and technologically advanced countries in the world,” the 2013 Freedom House report reads.

In addition to its technological savvy, Estonia’s Soviet past and proximity to the current conflict between Russia and the Ukraine allowed Kerry to chide Russia’s recent actions.

“As the Ukrainian people are marching toward a democratic future, Russia’s military is massing on the borders,” he said.

Kerry also referenced a recent situation in which the founder of Russia’s largest social network, Vkontakte, said he was forced to resign after refusing Russian President Vladimir Putin’s orders to spy on anti-Russian leaders in Ukraine.

“It matters that you can blog about an election campaign, organize on Facebook, use Twitter to hold your government accountable,” Kerry said. “I mean, all of these things make all the difference in today’s world.”

The full transcript of Kerry’s remarks as well as a playback of him giving his speech is available on the State Department’s website.

Photo by Secretary of Defense/Flickr (CC BY 2.0)