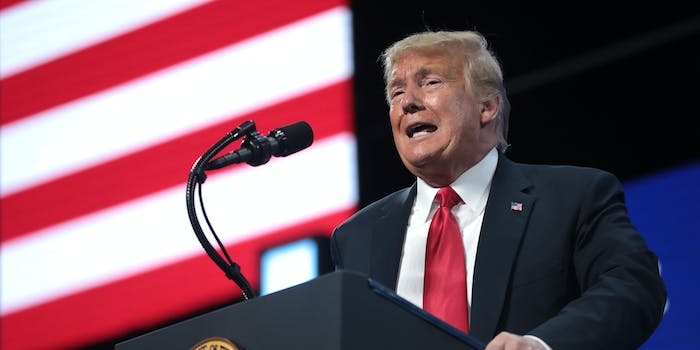 Trump had threatened a veto.

Trump had repeatedly threatened to veto the annual spending bill unless a Section 230 repeal was part of it. The president even went as far to claim that Section 230 was a threat to “national security” in his push for a repeal to be part of the spending bill.

Section 230 is an important internet law that shields all websites from being held liable over content generated by users. Despite this, the law has become a target for lawmakers on both sides the aisle—including members of the incoming Biden administration.

While much of the talk about Section 230 has centered on tech giants, experts have warned that a repeal of the law would affect any website that has user-generated content and would have wide-reaching ramifications online.

The president has become fixated on the law as the days of his presidency near a close, and nominated a commissioner to the Federal Communications Commission (FCC), Nathan Simington, who had a hand in crafting the president’s social media executive order that targets the law.

Simington’s nomination was advanced earlier this month, despite concerns raised by lawmakers and tech advocates.

While Trump vetoed the NDAA, it passed through Congress with veto-proof majorities, making it possible that lawmakers override the veto.

In a statement from the White House, Trump specifically said the lack of a Section 230 repeal was part of his reasoning for a veto.

“The Act fails even to make any meaningful changes to Section 230 of the Communications Decency Act, despite bipartisan calls for repealing that provision,” Trump said, adding: “It must be repealed.”

CNN reported on Tuesday that Congress has expected Trump’s veto of the NDAA. The House of Representatives will reconvene on Monday, and if it is successful in overriding the veto, the Senate would reconvene on Tuesday.