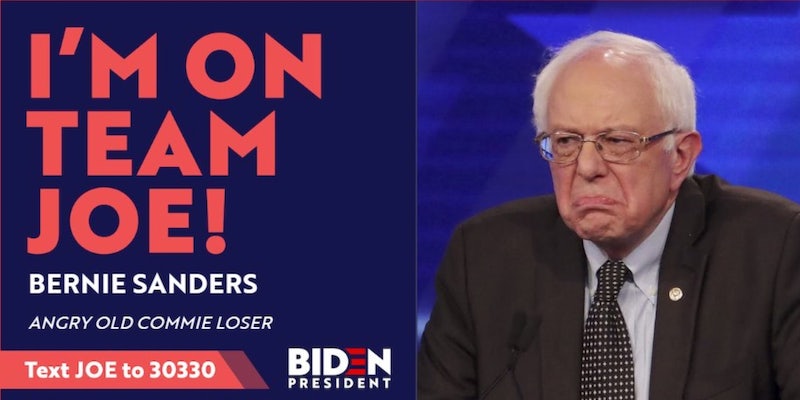 With everyone locked down due to the coronavirus, building momentum online will be more important than ever in the 2020 election.

That’s apparently why former Vice President Joe Biden, the now presumptive 2020 Democratic nominee, launched the “I’m on Team Joe!” avatar generator, where you can slap on a picture of yourself, plug in your name, add your location, and blast your support to your own following.

Giving the internet three full variables is a recipe for disaster, especially when you make the option for city and state a blank box where anyone can write anything.

Naturally, the meme generator got trolled, predominately by fans of President Donnald Trump, teasing Biden for well, just about everything.

There was Sen. Bernie Sanders (I-Vt.) and his (possibly reluctant) endorsement.

The news media rallying behind Biden.

As well as President Barack Obama finally coming out in support of his old vice president.

It included some shots at Democrats and their ties to Hollywood.

As well as some mentions of Biden’s more peculiar turns of phrase.

And an obligatory shot at Hunter.

You can make your own here.