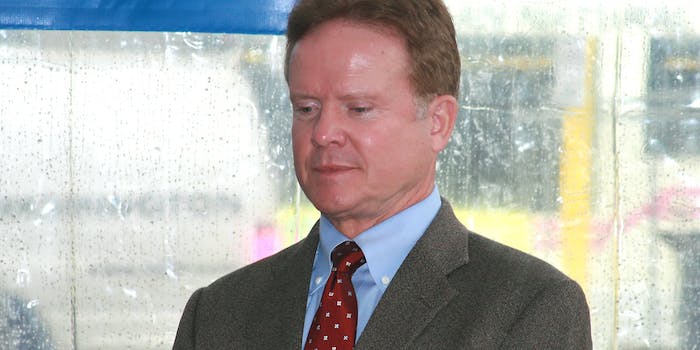 The bigger question is, will he still run as an independent?

Jim Webb will not be the Democratic nominee for president in 2016.

In a livestreamed press conference, the former governor of Virginia confirmed that he is dropping out of his party’s race for the highest office in the land.

Webb also strongly hinted that he would run as a centrist independent if he found enough support, but he did not make any official announcement about an independent run for the White House.

"Poll after poll shows that a strong plurality of Americans is neither Republican nor Democrat. Overwhelmingly they’re independents."

"Americans don’t like the extremes to which both parties have moved in recent years, and I don’t blame them." #WebbNation

Webb’s decision comes a week after a lackluster showing at the first Democratic debate. He spent much of his limited speaking time complaining about how little speaking time he had, making him a punchline on Twitter. He was decidedly further to the right than the other four Democrats on a number of issues, and identified himself as the sole candidate to refuse to say “black lives matter”—instead insisting that “every life in this country matters,” a nod to the controversial “all lives matter” countermovement to Black Lives Matter.

Webb also repeatedly touted how his vast military experience—he’s a former Secretary of the Navy and decorated Marine who served in the Vietnam War—dwarfed his competitors. His efforts to distinguish himself from the other candidates did not, however, seem to make a dent in his poll numbers, which remain just above 1 percent.

Updated 12:49 CT, Oct. 20: Webb confirmed that he is dropping out of the Democratic primary at a press conference on Tuesday afternoon.