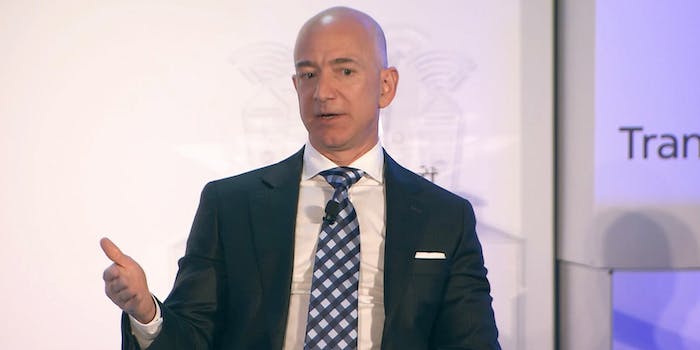 The richest man in the world is the son of a Cuban immigrant.

Amazon CEO Jeff Bezos has donated $33 million in scholarships to Dreamers, the undocumented immigrants brought to the U.S. as children who now qualify for the Deferred Action for Childhood Arrivals (DACA) program, according to the Amazon-owned Washington Post.

The money will support TheDream.Us, a nonprofit working to help undocumented immigrants attend and graduate college. Many of the students aided by the organization are unable to receive in-state benefits or federal grants and loans. Through aid offered by TheDream.Us, the Dreamers will be able to attend one of 76 colleges and universities in 15 states, including Arizona State University, University of Houston, University of Washington, and Rutgers. The contribution from Bezos and his wife MacKenzie are the largest in the organization’s history and will help fund 1,000 scholarships.

The donation “is a shot in the arm for Dreamer students at a time when some are questioning whether they should be in the United States at all,” Candy Marshall, president of TheDream.US, told the Washington Post. “We would invite anyone who questions the value of Dreamers to please come meet some of our students.”

Bezos, who recently became the richest man in the world, has been criticized for not giving enough of his enormous wealth away to charity, especially when compared to others like Bill Gates and Warren Buffet. Now he’s working to change that. In June, Bezos asked his Twitter followers for suggestions to help him create a long-term philanthropic strategy. It’s no surprise he starting with DACA. For Bezos, helping undocumented immigrants hits close to home.

“My dad came to the U.S. when he was 16 as part of Operation Pedro Pan,” Bezos said in a statement. “He landed in this country alone and unable to speak English,” Bezos said in a statement. “With a lot of grit and determination — and the help of some remarkable organizations in Delaware — my dad became an outstanding citizen, and he continues to give back to the country that he feels blessed him in so many ways. MacKenzie and I are honored to be able to help today’s Dreamers by funding these scholarships.”

Bezos backed DACA recipients last year when he joined 350 leaders in signing an open letter to Trump in support of the program. Trump ended DACA protections but now faces challenges in court.