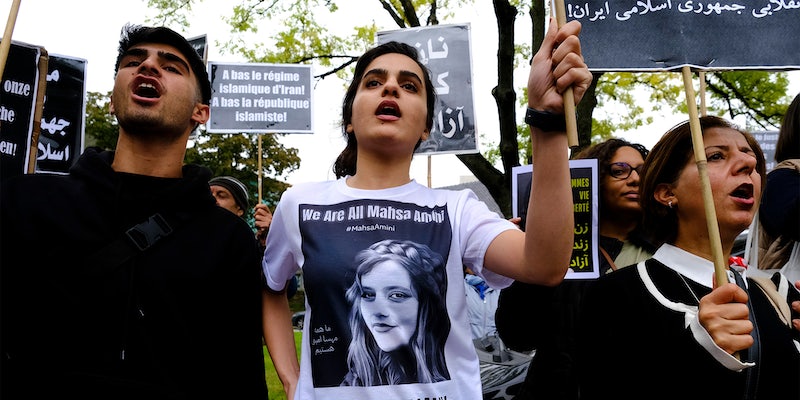 Inside Iran, protesters remain unfazed by the regime’s high-tech crackdown

For the past month, Isfahan-based Azadeh Iravani (a pseudonym) has used various anonymous social media accounts to participate in the ongoing protests against the Iranian regime.

Under a number of handles, Iravani shared videos of demonstrations, not just from her hometown, but from across the country, all in an effort to help the protests gain traction. But as the protest gained steam in Iran, and the regime resorted to enhanced internet shutdowns, innumerable digital protesters like Iravani had to adapt accordingly.

“The government turns the internet on for a few hours, but the connectivity is inconsistent, even mobile networks are shut off. My [social media] profiles go offline [due to lack of internet connectivity]. Even the VPN [Virtual Private Network] I bought the subscription for, doesn’t always work,” she told the Daily Dot. Iravani, who runs a small Instagram business from her hometown, revealed that many like her are doing their best to circumvent the shutdowns, needing to merge their professional and activist lives.

“They know that they cannot completely shut down everything on the internet because the existing financial crises would become even worse. So whenever the crackdown is relaxed I use the internet to work on both my business and the online protests,” she said.

Those protests exploded after the death last month of Mahsa Amini, in custody of the morality police, after she had been arrested for not wearing the mandatory hijab “properly.” What began as demonstrations against sexist Islamic modesty codes metastasized into a mass awakening against the Islamic Republic. It’s a protest fueled by new tech that’s made activism more accessible, but which is being ruthlessly squelched by the Iranian regime thanks to its own digital innovations.

While speaking to the Daily Dot many Iranians said the regime aspires to disconnect them from the world, believing an interconnected Iran would be the end of their totalitarian state. Many activists insist that the regime’s policies, both online and offline, are unsustainable.

“We can see the limits of censorship as pictures and video recordings of protests make the rounds globally,” rights activist Zainab Zeb told the Daily Dot, insisting that no amount of tech curbs would discourage the Iranians. “Engaging in protest in Iran has always been a great act of courage. Those who face down the horror of live bullets likely won’t be deterred [by online crackdowns]. They are well aware of the risks,” Zeb added.

Many Iranians insist that the internet connecting the locals with ex-pats has been a special cause of concern for rulers in Tehran, who are desperate to counter the global narrative that Iranians are rising up against the clerical regime.

“This is the most significant round of protests since the ones in 2009 [over] electoral fraud. The expatriate satellite media that reaches into Iranian households enables the citizenry to remain informed about what is going on despite the internet shutdown. The sizable Iranian expatriate community has done an excellent job in being an echo chamber for the demands articulated by the protestors inside the country,” said Mehrzad Boroujerdi, a professor at the Missouri University of Science & Technology, and author of “Postrevolutionary Iran: A Political Handbook” while speaking to the Daily Dot.

It has been the amplification of scenes from Iran, largely with the help of overseas Iranians, that has allowed the world to become aware of the ongoing protests, in turn pushing the regime to up the ante on its draconian internet measures.

Even so, internet shutdowns aren’t the only means that the regime is using to silence protesters. Iran is also abusing its Digital ID system and facial recognition tech that were already in place to enforce its hijab laws. Scores continue to be targeted in arrest waves, as Iran uses the latest tech to identify dissenting protesters, with at least 185 having been killed. Defiant demonstrators use face coverings, including COVID-19 masks, to shield themselves from recognition.

“Thousands of people protesting means the state is not able to monitor everyone or prosecute them despite its surveillance capabilities. Protesters have also started to smash these monitoring devices where they can,” said Boroujerdi.

Even so, in addition to efforts to protect themselves from facial recognition on the streets, demonstrators have to equip themselves with ever-evolving tools to shield their online identity.

Iran is blocking domain-based DNS, signifying that the state is identifying VPNs by the IP addresses they are serving from and individually blocking them.

Additionally, not all VPNs allow for full circumvention of internet bans.

Iran is successfully blocking those users who are adding another layer of security to their browsing via the DNS, both by targeting their domains and capitalizing on the limitations of the VPNs that some of them are using.

“A DNS proxy VPN might not work if the requested resource is blocked in a way other than DNS or it might not work because all encrypted DNS requests are being blocked in Iran at the moment,” Mallory Knodel, the Chief Technology Officer at Center for Democracy and Technology, told the Daily Dot.

“Tor, Psiphon, Lantern and Ceno are circumvention tools that appear to be working in Iran because they are more obscure, also that they use bridging (i.e. the first hop is ephemeral), and their distribution and architectures are decentralized,” she added.

Tech experts insist that Iranian protesters should keep themselves informed about the tools they’re using. Some of the security tools can circumvent blocks, others can ensure privacy, and some protect identity. Some tools use a combination of these safeguards, while others require users to compromise one or two of these to ensure the third.

“Using a VPN to circumvent a block in order to log into a social media website is an action that risks privacy (cookies and fingerprinting) and identity, unless that is protected in other ways. End-to-end encrypted messaging plays an important role in providing nearly full protection and some services, like Signal, leverage circumvention techniques,” said Knodel.

As the tug-of-war between censors and circumvention tools continues, the imminent peril facing Iranians resulted in an outpouring of immediate external support. The U.S. allowed tech companies to boost internet despite sanctions on Iran.

“Efforts to provide coverage in Iran by getting around the censors, admirable as they are, [alone] are unlikely to prove successful in the short term,” insisted Zainab Zeb. “Over the long run, however, the question remains open, and the likelihood does exist that advances in technology will prove to be a match for autocratic regimes.”