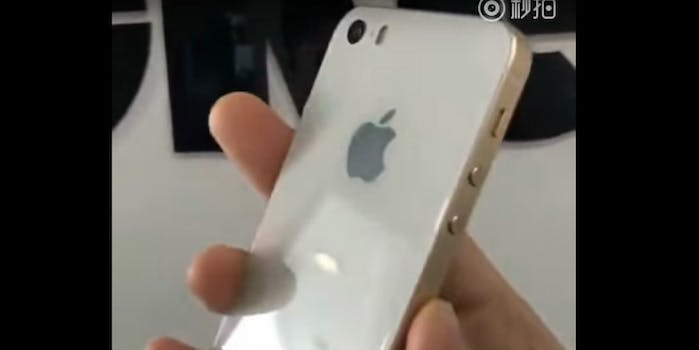 Apple may be preparing a new budget phone—and killing its flagship.

We’re still several months away from Apple’s always-anticipated iPhone reveal, but the rumor mill is already grinding away.

Several reports in the past week paint a fascinating picture of where the phone line might be heading. Perhaps the most interesting rumor involves the aging iPhone SE, Apple’s only remaining small device first released back in 2016.

Earlier today, a video from Weibo posted by Czech Apple blog LetemSvetemApplem allegedly shows the second-generation iPhone SE, or what is being called the SE 2, in the flesh.

As you can see, the device looks a lot like the current model but appears to have a glass back like the iPhone 8 and iPhone X. This would enable wireless charging, a feature Apple finally embraced last year. But there are some red flags that suggest the device in the video is only a mockup.

You’ll notice the alleged SE 2 still has a headphone jack. Apple abandoned the port on all other models, and no one expects it to go back on its decision. While the omission was criticized by customers, Apple ultimately benefited by launching the immensely popular AirPods.

The only reason Apple would leave the headphone jack on the SE 2 is to keep the price down. The iPhone SE, Apple’s cheapest phone by far at $350, is meant to serve a different customer base than those who can spend $1,000 on a device. If Apple releases an iPhone SE successor without a headphone jack, it would force budget shoppers to purchase another $160 accessory. Apple might not want to take that risk, especially since the low-to-mid range smartphone market is already dominated by Android.

Same goes for the Touch ID fingerprint sensor. While it remains on the iPhone 8 and iPhone 8 Plus, Apple appears to be transitioning to Face ID. However, that technology may cause the price of the SE 2 to skyrocket.

Rumors about an upgraded iPhone SE have been circulating for months. The four-inch device hasn’t been upgraded since March 2017, when it received minor improvements, including a boost in storage. Recent reports claim the unconfirmed device would have a similar design and same screen size but come with a glass back for wireless charging and an upgraded A10 chip. Whether it will have a headphone jack is still a bit of a mystery. Apple could either save resources and use the same design as the first-gen device or get rid of the headphone jack for better waterproofing (and a jump in AirPod sales).

If an SE 2 is on its way, Apple would likely announce it within the next month, before the WWDC developer conference, though there remains a slim chance it uses the event as a launchpad for the affordable iPhone.

The iPhone X may soon be discontinued

Low earnings from one of Apple’s biggest suppliers, Taiwan Semiconductor Manufacturing (TSMC), suggests the demise of the iPhone X. Neil Campling, co-head of the global thematics group focusing on technology at Mirabaud Securities, told clients the manufacturer’s oversupply of chips has “never been higher,” CNBC reports.

“With the declines in iPhone X orders and the inventory issue at TSMC at record highs, which basically reflect a need to burn off inventory. Why? Because the iPhone X is dead,” Campling said.

It appears TSMC produced huge amounts of chips for the iPhone X, but Apple isn’t buying them. If that’s the case, it would indicate the company is no longer building new phones and therefore has plans to discontinue the iPhone X. Campling said unsold inventory will still be available but new units won’t be produced. Apple would likely drop the iPhone X from its site when it announces new devices in September instead of making noise with a standalone announcement.

“The simple problem with X is that it is too expensive,” Campling told CNBC. “Consumers are turning their backs on high-priced smartphones.”