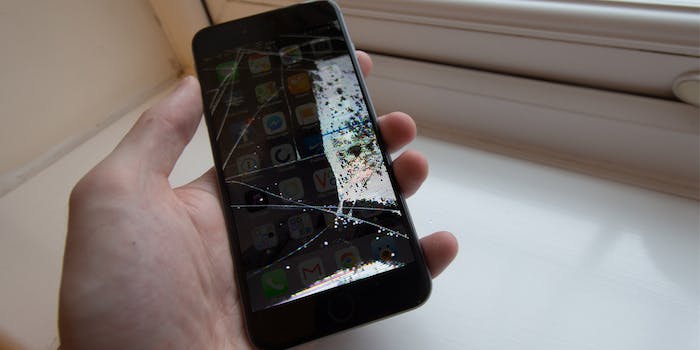 After ‘Bendgate,’ Apple invites journalists to its iPhone testing facility

Where iPhones go to die.

It’s not been a great month for Apple. Its iOS updates have broken people’s iPhones. Its collaboration with U2 to give away their new album was so widely criticised they had to release a tool for deleting the offending item. The critical response to the highly-anticipated Apple Watch was a muted “cool, I guess.” Hundreds of intimate photos of high-profile female celebrities were stolen from its iCloud servers—with reports saying they were warned of a security breach at least six months before the photos were released.

And now our shiny new iPhone 6’s are bending.

Alternately titled Bendgate, Bendghazi, or the “bend of days” (OK, that last one’s mine), iPhone owners have discovered to their horror—and to the amusement of everyone else—that the new hardware is surprisingly easy to bend and misshape if left in back pockets.

Apple initially went on the defensive, claiming that just nine people have complained about the issue to date—something easily disproved by a simple Twitter search. But now the technology company has stepped up its PR game, and has invited assorted technology journalists to come visit its iPhone durability testing facility (or, as the Verge calls it, “the building where Apple tortures the iPhone 6”).

Along with the Verge, reporters from Re/code and CNBC paid a visit to Apple’s labs, to see for themselves how Apple puts a new handset through its paces ahead of any official launch. The iPhone 6 is “the most tested product we have ever done,” Apple head of engineering Dan Riccio told CNBC, explaining it was tested 30 thousand times before its Sept. 19 release date.

Re/code reports that the gamut of tests include the Three-Point Bend Test, where the iPhone is balance at either end and 25kg of weight is applied at the centre; the Pressure Point Test, where a singular point of up to 10kg of pressure is applied; the Torsion Test, involving attempting to twist the hardware; and the Sit Test, in which a machine simulates exactly what it says on the tin.

Throughout, Apple maintained that Bendgate is nothing but a few isolated incidents. The company’s Senior Vice President told the Verge that “as we expected, its’s extremely rare to happen in real world use,” and that “in designing that we then have to validate heavily, and see how does it live up to real world use, and what are the forces and pressures on it, and how do you measure and prove that you’ve delivered on a specification.”

This isn’t the first time Apple’s gone on the PR offensive: After the iPhone 4 was plagued with complaints about its antenna, the company “allowed select journalists into its labs” to see testing processes first-hand, Re/code reports.

Apple is now offering to replace handsets affected by Bendgate free of charge, subject to a “Visual Mechanical Inspection” test. But there may already already be a fresh scandal on the horizon for the Cupertino company—Business Insider reports that Apple has now been caught using Windows XP in its iPhone testing facility.