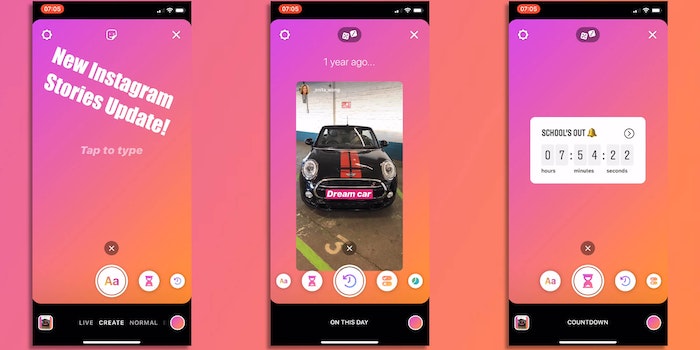 Instagram has updated its Stories camera for iOS and Android apps with the launch of its “Create” mode. The Instagram Create camera includes an “On This Day” option, effectively turning “#TBT” or “Throwback Thursday” into a new Stories filter.

On This Day has long been an important and controversial Facebook feature. The tool shows users what they posted to Facebook in years past — sometimes that’s a vacation photo, sometimes it’s a wedding pic…and other times, it’s something you posted about an ex or perhaps even a photo of someone who’s passed away. Eventually, Facebook opened up On This Day a bit to allow users to have some say in what shows up in their feed.

The Create camera’s flashback currently doesn’t have these options, so tread carefully if you’re worried about any potential photo memories popping up.

The rest of the Instagram Create camera has plenty to offer as well, including GIPHY-powered GIFs as backgrounds, new polls, and quiz sessions. But the On This Day option feels like it has the chance to become incredibly popular: With it, users can reshare old content, posted on the same date in previous years. Users first select On This Day by tapping the rewind icon, then they can tap the dice button to see a different post; then, it can be shared Stories.

The Instagram Create camera is far from the only new feature within the app. Instagram now supports iOS 13’s new dark mode, which automatically turned on for most users. The Facebook-owned brand also plans to rid the app of the Following feed by the end of the week. And last week, Instagram released a brand-new messaging app named Threads, aimed at user communication with their “Close Friends.”

Here’s a YouTuber’s brief breakdown of all the features: