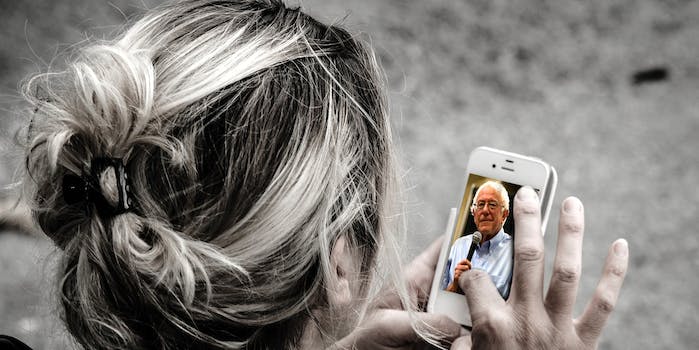 'Campaigns are people talking to people.'

Zach Fang was working as a regional field director for the Bernie Sanders campaign in Iowa late last year when he noticed something odd.

Sanders, the independent U.S. senator from Vermont who’s challenging former Secretary of State Hillary Clinton for the 2016 Democratic presidential nomination, drew large crowds of fresh-faced, young supporters to his campaign rallies, where they craned their necks to catch a glimpse of the 74-year-old “democratic socialist” who was calling for a political revolution. But most of Sanders’s volunteers were significantly older than those in the crowds.

Sanders had enthusiasm from the under-30 crowd—that was obvious—but it wasn’t translating into a grassroots campaign that is so often the lifeblood of American politics. President Barack Obama‘s 2008 campaign proved young people would pound the pavement for candidates they liked. Why the disconnect?

It was mid-September when Fang had a breakthrough idea—an answer to this question that would change the course of the Sanders campaign and, perhaps, U.S. history. And it came in the form of an app.

“We were like, ‘Oh, that’s where the young people are. They just don’t pick up the phone.’”

About a month prior, the campaign had given Fang access to an app called Hustle, which allows its users to initiate and then manage a large volume of text-message conversations. In races he worked during the previous two election cycles, Fang noticed some of his most effective volunteer coordinators had relied heavily on text messages. Other means of communication, like email and phone calls, were yielding diminishing returns.

“Campaigns are people talking to people,” Fang said, and the Sanders campaign wasn’t talking to the people it needed to reach.

With nothing to lose, Fang used Hustle to send out a flood of text messages to people who had signed up with the campaign and indicated that they were interested in volunteering.

“That weekend, over half of the people [who showed up] we had never seen before, and almost all of them were younger,” Fang recalled. “We were like, ‘Oh, that’s where the young people are. They just don’t pick up the phone.’”

For Fang, Hustle was a revelation. But he wasn’t entirely sure whether his success was a one-time fluke. After Iowa, Fang was reassigned to Oklahoma. His team there was small, just a half-dozen people for the entire state. Would Hustle produced the same results in Oklahoma as it did in Iowa?

Fang’s team pulled the numbers of every possible Sanders volunteer in the campaign’s database and Hustled everyone on the list. The messages they sent out—all Hustle messages are all written by actual people, not computers—consisted of a personal introduction, and information about the upcoming event. The texts intentionally excluded location information, because Fang and his team wanted their targets respond with follow-up questions as means of starting a dialogue.

With three days notice, four people texting brought 381 people to the campaign’s first official event in Oklahoma. A few days later, 338 showed up in Tulsa. These numbers were astounding, especially in a state with just 3.8 million people. When Fang asked the room in Tulsa how many people showed up because of text, 95 percent of the hands in the room shot to the ceiling, he said.

“[If we had tried to organizing using phone calls] we couldn’t have spoken to that many people. We could have barely made that many phone calls in that amount of time. If an organizer makes 200 calls, its a great day. … And if 10 of those people show up its considered a success,” Fang said. “That first weekend, we did 8,000 … [contacts] with six staffers. With a typical field program, you’re not hitting 8,000 doors in two months with 30 organizers. We did it in one week with six. The next week, we did 15,000.”

A few weeks later, Sanders beat Clinton in the state by a 10-point margin.

On election day, the Sanders campaign used Hustle to send out text messages pointing to a local number to report any shenanigans at the polls. The number went viral and soon became that national hotline for Sanders supporters to report issues at polling stations around the country.

While Hustle’s texting network especially helped the campaign reach young people, it was successful across the board. People over 40 were more likely than young folks to not only respond to the campaign’s texts but engage in extended back-and-forth conversations. Older people are traditionally more likely to respond to entrants from political campaigns, and the generation gap on Hustle was significantly smaller than with phone calls, but the high response from all age groups showed that, in 2016, texting may be the ideal way to reach everyone—not just millennials.

Hustle, Fang said, “is like my favorite thing in the world now.”

After spending six years as a software engineer at Facebook, Roddy Lindsay was looking for something different. He volunteered with Fwd.us, the immigration-reform advocacy group founded by Facebook founder Mark Zuckerberg. He was interested in figuring out how a modern advocacy group approached the problem of community engagement—how did they get people interested in their cause and show up when it really mattered?

“What I saw was that the existing tools were really good for blast communication—very efficiently reaching lots of people and asking them to to do low-bar actions. Online petitions work really well because you can get a lot of people, you can target them efficiently, you can get them to sign a thing. Low-dollar fundraising has also worked really well online through email campaigns,” Lindsay said. “But what I saw lacking was a tool that really empowered the people working on behalf of Fwd.us’s organizing staff to really help them build relationships with their people. They had these people who basically their job was to build relationships with people in their communities who were their target demographics—high-skill immigrants and other people in the community who cared about immigration reform. The tools they had didn’t really allow them to do that in an efficient way.”

Together with co-founders Perry Rosenstein and Tyler Brock, Lindsay created Hustle. Their first client was Fwd.us. Eventually, the app caught the attention of the Sanders campaign. Fang—young, hungry and looking for something to do—was tasked with being the first organizer to give it a shot.

At its core, Hustle is a smartphone-based, peer-to-peer messaging app designed to allow its users to manage a large number of text message conversations. While it enables organizations to pre-load suggested templates, import large lists of people to contact, and keep track of hundreds of individual message threads, it doesn’t enable automated mass-texting. Every message is sent by a human being, every response is part a real conversation, hence its power for the type of efforts—like volunteer recruitment and coordination—that rely on strong inter-personal connections. 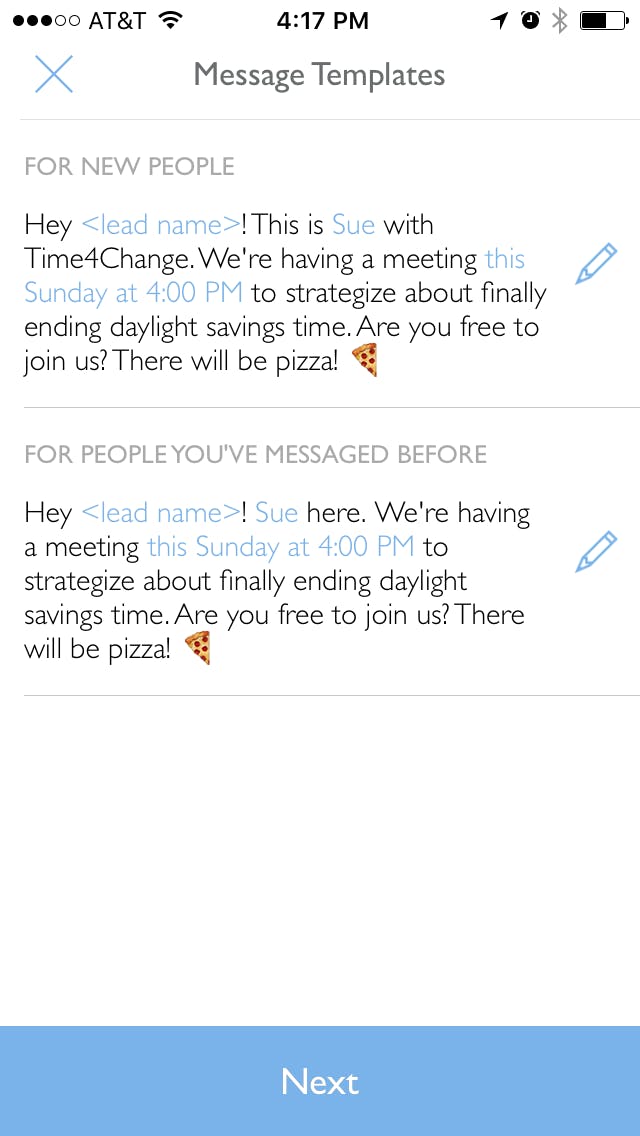 Screenshot of the Hustle app in action 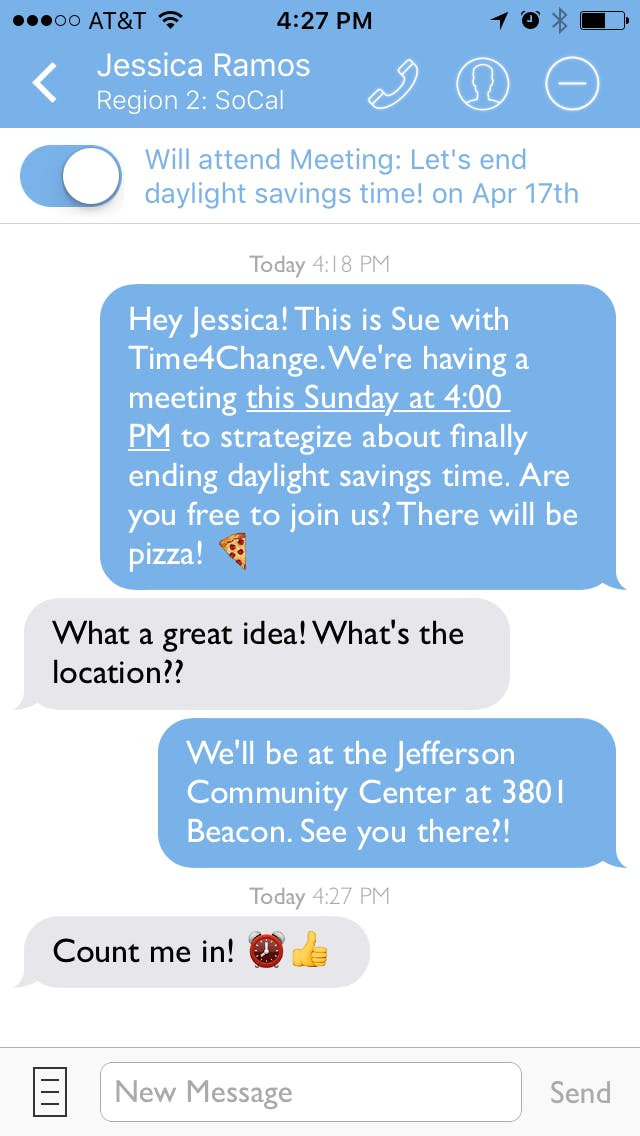 Screenshot of the Hustle app in action

While the Sanders campaign may be Hustle’s highest-profile client, and its creators do lean decidedly to the left, the platform is open to any organization regardless of its political slant. Hustle is used by Republican campaigns, issue-based organizations across the ideological spectrum, and even a number of for-profit businesses, such as a farmer’s market that uses it to keep tabs on its vendors. Basically, Hustle can be used in any instance where an organization needs to quickly and often informally maintain open lines of communication with people from whom it requires something.

To date, the platform has sent over 10 million messages. On its biggest days, over 700,000 texts are sent using Hustle.

To date, the platform has sent over 10 million messages. On its biggest days, over 700,000 texts are sent using Hustle, according to Lindsay.

Organizations can also use the platform to gather data and systematically learn precisely what language resonates and what falls flat. Dan Wagner, the chief analytics officer of Obama’s 2012 reelection effort, noted during a presentation at this year’s South By Southwest Interactive conference in Austin, Texas, that political campaigns are “strangely the most data-driven industry [in America right now],” meaning this type of data is among the most valuable resources a campaign can have in 2016.

There’s something about the medium of text messaging that, for this type of communication, hits a particular sweet spot. Email, especially impersonal blast communications, tend to get ignored. Campaigns are largely shut out of calling cellphones, and most calls to landlines go unanswered. People often have their phones set to notify them when a text arrives and, when they see one, they check it almost immediately—just watch what happens when someone gets a text during a dinner party. All that could change if people’s SMS inboxes become packed with spam, but for right now, it works.

Fang said that, with texts, he gets a 98 percent open rate, and 83 percent are opened within the first three minutes. If you send a text, it’s virtually guaranteed someone is going to read it. If the message seems like it was sent from a real human being, who can succinctly explain who they are, what they want, and how exactly they got the number in the first place, some sort of response is likely.

“People, it turns out, respond positively to other people, in a way they don’t to automated mail-sending robots,” said Lindsay. “We think a couple hundred is the sweet spot in the number of conversations that any person [on Hustle] can carry on at once. If you do the math, a campaign can have conversations with hundreds of thousands of people, or even millions of people, in the span of a couple days.”

For any campaign, from insurgent upstarts to seemingly inevitable establishment, that’s something to ignore at its peril.

Correction: Hustle has sent more than 10 million messages to date.