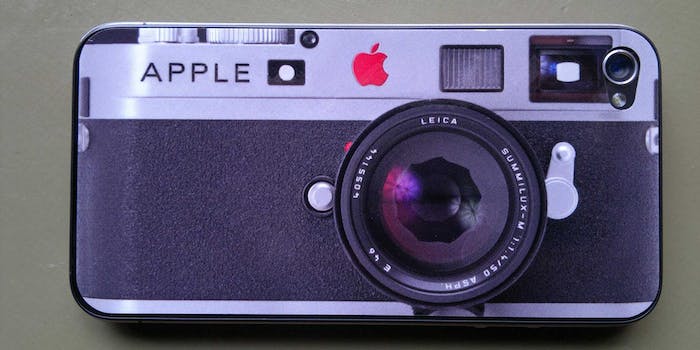 Here’s how to shoot iPhone video like a pro

Whatever you do, don't shoot vertical video.

We’ve all seen the best and worst of iPhone videos. For every high-quality short film, there’s dozens of fuzzy and shaky clips where you can barely make out what anybody is saying.

Does that mean there’s no hope for the iPhone filmmaker? Hardly! As a video producer for Channel Awesome, my “equipment” cost about $200 altogether—except the iPhone, obviously, and my video editing software.

You don’t need a $5,000 video camera and five overeager interns to film something interesting and engaging. You can turn your iPhone into a complete studio kit with the right tools. And with the new iPhone 6 boasting up to 60 frames per second, it’s only going to get better for iPhone filmmaking.

One of the biggest problems for iPhone filmmaking is shaky cam. Since the iPhone is so small, it can register even the tiniest of movements. If you’re going for a Cinéma Vérité feel, it can be effective, but otherwise it’s an instant giveaway that the footage is amateurish.

There are certain special tripods, like the GorillaPod, that are designed to encase the iPhone. But in my opinion, hooking your iPhone up to an actual tripod or stabilizer is the best way to go. My favorite tool is the Glif from Studio Neat ($30), which adjusts to fit the size of your phone and case. Attach it to a tripod and, boom, goodbye shaky cam. Just be careful you don’t lose the rather small Glif; I’m on my third one already.

If you want a little more portability, there are a couple of stabilizing rigs that are relatively affordable. The Cam Caddie Scorpion ($39), for example, is designed to work with the Glif and creates a solid stabilizer for tracking or mobile shots.

If you’ve got a cloudy day outside, then stop what you’re doing and go film something out there! Cloudy days are the best time to shoot. But when you’re indoors or it’s darker, you need some kind of lighting. The iPhone tends to look murky when there’s inadequate lighting, and it can even pixelate the image. And strong sunlight means lots of shadows, another downside.

Lighting rigs are expensive; it’s usually a couple hundred dollars for the most basic sets. But if you’ve got a hunger to DIY you can make your own setup for less than $50. I made a three-point lighting system using clamp lights from Home Depot and doubled-up white pantyhose from Target, thanks to a few tricks from Full Sail University.

Three-point lighting means you surround your subject with two lamps on either side and one from behind. It’s recommended that you use 150W bulbs, but I had to stick with 100W because the others were too long for my clamp lights. Full Sail University recommends building a support system with PVC pipe to hold the clamps in place, but I usually just grab step ladders, lamps, or whatever else is handy.

If you’re needing something white to bounce off of the face for mid or close shots, I recommend a $5 three-sided presentation board normally used for school science projects. Put it behind the iPhone and tripod. It’ll help bounce the light and lessen sound loss.

The iPhone is many things, but it is not the best audio recorder. If you’re looking for ambience, then it’s a good tool, but localizing audio to one person is almost impossible, especially when you’re recording from a distance. That’s why you need a microphone. It can’t be stressed enough: You need a microphone.

There are two key options when picking a mic: standard or lavalier. A lavalier mic attaches to your lapel and can record one person wonderfully. There are actually some great tips to turn your current or old iPhone headphones into a great lavalier mic, if you’re looking to save some money. But if you have more than one person, or are trying to capture a scene, then a standard or shotgun mic is the better choice.

Sadly, while just about any pair of headphones works with the iPhone, the same can’t be said for microphones. The iPhone has a very specific input that doesn’t work with standard stereo mics. There are some microphones that are designed for the iPhone, but the good ones usually cost at least $200.

Luckily, there’s a way around this. kV Connection makes an adaptor cord ($25 to $29) that lets you attach any stereo mic to an iPhone. I’ve tried other splitters, like the Wiretap, but so far kV Connection is the only one that’s actually worked. I use it with the Audio-Technica ATR-6550 shotgun mic ($55). It isolates very well, but it can be quiet if the mic is too far away, so keep an eye on that.

The iPhone’s native Camera app actually holds up well, so long as you have generally similar lighting in your entire shot, like in the video above. But for situations where lighting is varied, like outdoors, the Camera app isn’t going to cut it and you’ll need an app.

The best one I’ve found is the FiLMiC Pro ($4.99). FiLMiC Pro separates between focus and exposure, meaning you can focus on one item while adjusting lighting for another. It also has options for brightness and white balance. You need to adjust brightness because, otherwise, you could have something that’s way too dark or way too hot. And white balance makes sure your subjects don’t look yellow on screen. Simply hold up something white to the camera and adjust the white balance to it.

Here’s where things get tricky, and I do a bit of cheating.

If you’re wanting to stay cheap and either edit on the iPhone or iPad, then I recommend going with Pinnacle Studio ($9.99 to $12.99). It’s got more options than iMovie. However, I highly recommend moving your footage to a computer. The reason is simple: You need to see it in a bigger context in order to determine what really looks the best.

For Mac users who want to do things on the cheap, iMovie is perfectly acceptable. There are some limitations, but you’ll be able to cut and trim as you need. I also know a lot of people who use Windows Movie Maker. Again, it’s simple, but it gets the job done.

But if you’re like me and want to take things to the next level, sadly, you’re going to have to spend a bit of money. I use Final Cut Pro X ($300), which I like to call “iMovie+.” It’s a great prosumer tool and suits my needs just fine. There’s also Adobe Premiere Pro CC ($20-30 per month), for those who don’t care for Final Cut or don’t have a Mac. If you’re asking whether you should get Avid Media Composer, my answer is no: It’s not worth the cost for iPhone filmmaking, in my opinion.

All that’s left to do is go out and find something to film. If you use any of the tricks with your latest iPhone film, be sure to leave a link for it in the comments.

Photo via Al Pavangkanan/Flickr (CC BY 2.0)