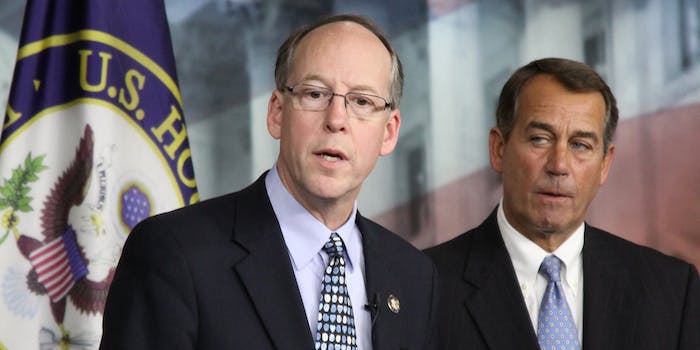 The battle is just beginning.

Members of the House committee charged with overseeing the FCC clashed over net neutrality during a Wednesday hearing on the future of the Internet.

Democrats and a public-interest group representative pushed the need for Title II regulation as Republicans and their outside allies harshly condemned it.

“Tomorrow’s commission vote does not signal the end of this debate.”

The hearing of the House Energy & Commerce Committee’s Subcommittee on Communications and Technology, which lasted almost two hours, largely served as an opportunity for Republicans to promote their net neutrality bill that would preempt FCC action.

The lone voice supporting the FCC’s expected reclassification of the Internet as a public utility was Gene Kimmelman, president and CEO of the group Public Knowledge. In his testimony, Kimmelman noted that the FCC’s “critical” rules had received support from millions of Americans.

Kimmelman said that while he understood Congress’s hesitation over a regulatory approach, he believed that FCC Chairman Tom Wheeler was “very sensitive to the need for investment in infrastructure and expansion of broadband opportunities.”

Wheeler, Kimmelman told the House panel, “wants to regulate as little as possible.”

The other witnesses called to testify at the hearing opposed Title II regulation and expressed starkly different opinions on net neutrality itself. Robert Atkinson, founder of the Information Technology and Innovation Foundation, said he wanted to “consign the term ‘net neutrality’ to the dustbin of history,” calling it “a biased term that has driven the debate to the false conclusion that there’s a one-size-fits-all Internet.”

Atkinson also called net neutrality a “stalking horse” for liberals’ desire to shift to to a publicly-owned Internet, saying that many open-Internet advocates equated the Web to a series of digital roads.

Republican members of Congress likewise savaged the FCC’s proposal as another example of supposed government overreach.

“Net neutrality, as espoused by its most aggressive proponents, there’s nothing neutral about it,” said Rep. Joe Barton (R-Texas). “It’s net regulation.”

The FCC, Rep. Barton added, was going to vote on “net nonsense.”

The only witness aside from Kimmelman who strongly supported net neutrality was former Rep. Rick Boucher (D-Va.), whose work as the chairman of the House Technology Subcommittee helped lead to the Telecommunications Act of 1996, which updated the statute governing the FCC.

Boucher, who lost re-election in 2010, said that he wanted to “ensure protection for network neutrality” through legislation. He pointed out that the industry was almost certain to challenge the new FCC rules and noted that the resolution to that court battle wouldn’t come for several years.

If a Republican won the White House in 2016, Boucher said, that president would not seek an appeal of a court ruling striking down Wheeler’s rules. If the rules survived the courts, the Republican president would move to reverse them by installing a conservative FCC chairman.

Either way, Boucher said, net neutrality advocates shouldn’t want to entrust the issue to the FCC, given that regulations, unlike laws passed by Congress, could be “swept away in the next presidential election.”

The other Title II opponents who spoke at the hearing joined Boucher in stressing the supposed lack of certainty that regulation, compared to legislation, would bring.

Rep. Fred Upton (R-Mich.), the chairman of the House Energy & Commerce Committee, said that the rules would mean a return to the courts, referencing the 2014 appellate court decision striking down the last FCC chairman’s open-Internet rules.

It was a “pipe dream,” the ITIF’s Atkinson said, to believe that Wheeler’s Title II approach would provide the kind of regulatory certainty that consumers and industry players expected.

Kimmelman, who received the lion’s share of skeptical questions from Republican lawmakers, acknowledged their desire to advance a net neutrality bill but said that it would be more prudent to first analyze the FCC’s proposal.

“While I fully understand the interest in legislating,” he said, “I would urge you today to sit back and see what is put forward tomorrow.”

Republican and Democratic members of Congress largely talked past each other in asking questions of the assembled witnesses. Rep. Anna Eshoo (D-Calif.), the ranking member on the technology subcommittee, pressed witnesses to provide specific proof of their doomsday claims about the effects of Title II regulation.

“It’s a very heavy charge that’s been made” from opponents of Title II, Rep. Eshoo said in questioning Larry Downes, director of the Georgetown Center for Business and Public Policy, who vehemently opposes Title II regulation.

“It’s one thing to say we’re concerned about something,” Eshoo continued. “It’s another thing to make a charge that (a) is definitely going to happen and it’s going to produce (b).”

“It’s a very heavy charge that’s been made” from opponents of Title II.”

Rep. Frank Pallone (D-N.J.) expressed bafflement at the subcommittee’s persistence in second-guessing the FCC as it prepared its net neutrality regulations.

“I really don’t quite understand why we as a subcommittee have to be constantly worried about who’s going to sue who,” Rep. Pallone said of criticisms that regulation opened the door for litigation. “We never know who’s going to sue, no matter what the action is by FCC or any other agency.”

One particularly contentious moment came at the beginning of witness questioning, when Rep. Greg Walden (R-Ore.), chairman of the technology subcommittee, said that he was introducing into the record a Wall Street Journal op-ed titled “Dictators Love the FCC’s Plan to Regulate the Internet.”

“Oh my god,” a Democratic lawmaker could be heard saying. “Come on.”

Walden, before moving on, responded, “I don’t generally comment on the submissions you have.”

The only thing on which the assembled Democratic and Republican lawmakers agreed was that the FCC’s vote set up a larger conflict over the future of the open Internet.

“Tomorrow’s commission vote does not signal the end of this debate,” said Rep. Upton. “Rather, it is just the beginning.”

“Tomorrow’s FCC vote will not be the end of the road,” Matsui said. “In some ways, the vote will be the beginning of the fight to preserve net neutrality.”

Correction: Former Virginia Rep. Rick Boucher is a member of the Democratic Party.