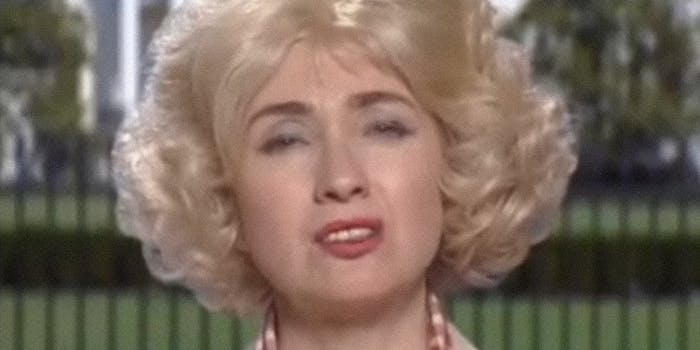 'HILLARY [IS] MOCKING THE MENTALLY HANDICAPPED'

“Mama always told me, ‘Hillary, Hillary Gump, life is like a hairstyle. You just keep changin’ it ’til you find somethin’ that works.’”

So said then-First Lady Hillary Clinton in a 1995 parody of Forrest Gump that supporters of Donald Trump, the presumptive Republican presidential nominee, are now using to bash the Democratic presidential front-runner.

The video, which first made the rounds a year ago, surged to the top of Reddit‘s r/The_Donald community, where Trump fans believe the video reveals the truth behind Clinton’s political strategy and exposes her to new attacks.

“HILLARY [IS] MOCKING THE MENTALLY HANDICAPPED,” writes one incensed redditor. Others are far more vulgar in their criticisms.

When the video first aired, it was reportedly “a hit,” according to the New York Times. The spoof was produced for the Gridiron Club Dinner, the oldest of the Washington roasts attended by elite journalists that dot the political calendar alongside the Washington Correspondents’ Dinner and the Alpha Club banquet.

Beyond her Forrest Gump parody lines like “The White House is just like a box of chocolates,” Clinton goes into the weeds with jargon about healthcare reform, which stood as the centerpiece of her time as first lady.

While many responses to the video on r/The_Donald are simply critical of Clinton, some commenters believe it reveals a stark contrast with the candidate we see today, whom many voters see as insincere.

“This honestly makes her seem more like a human being somehow. Like, at one point she was capable of some degree of self deprecation and humor to enough of a degree that she’d wear funny wigs and put on an accent for a weird-ass comedy sketch,” commenter Dick_Kickass writes. “She even blamed her own ‘advice’ for the failure of pretty much every Democratic presidential candidate since McGovern. It’s not a good sketch by any definition, but it shows how far the left has changed from back then.”