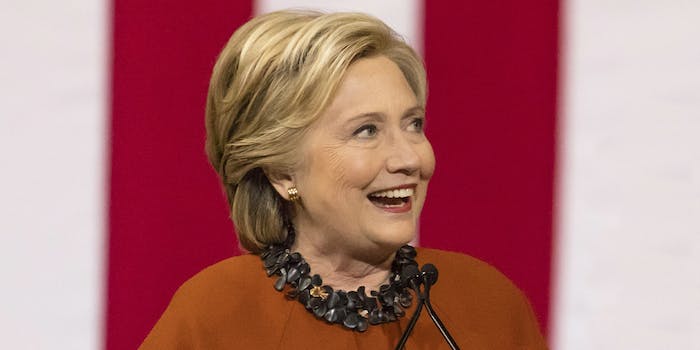 Hillary Clinton gets erroneously accused of conspiring to sink Kavanaugh

This one's a doozy.

On Tuesday, both Erick Erickson and Big League Politics, a leading conservative blogger and fringe conservative website, wrote about what they saw as a break in the Brett Kavanaugh case. A photo showing Hillary Clinton and another middle-aged woman with short hair was circulating, along with claims that the woman in the photo with Clinton was Debra Katz, Christine Blasey Ford’s attorney.

“Is that actually Christine Blasey Ford’s attorney behind Hillary Clinton? It sure looks like it,” said Erickson in the now-deleted tweet. He was retweeting the original post of Twitter user @Trump45awesome, who posted the photo with the caption, “Friends, if you were looking for undeniable truth who is behind these false allegations, take a hard look at this picture. Who is behind Hillary? This will make your blood boil.”

However, the woman in the photo isn’t Debra Katz at all, as Media Matters pointed out. It’s Barbara Kinney, Clinton’s photographer.

The photo, and accompanying conspiracy theory, apparently originated on a QAnon message board. QAnon is the conspiracy theory that claims, among other things that the Clintons are pedophiles and President Donald Trump is going to save America by jailing them and others involved in a depraved Democratic cabal.

Both Erickson and Big League Politics deleted their content about the photo. Erickson even apologized on Twitter. But that didn’t stop people from calling him online.

I wouldn’t sweat it, after your behavior this past week no one takes your timeline seriously anymore.

He has a bright future on 4chan

Nor did it stop TMZ from picking up the photo, too, although it pulled the post after Media Matters pointed out the error.

As conspiracy theory researcher Travis View pointed out, “The false claim went from 8chan, to QAnon Twitter, to MAGA Twitter, to mainstream conservative Twitter in under a day.”

Apparently @EWErickson is spreading the false, 8chan-derived claim that Hillary Clinton and Debra Katz were pictured together in a 2016 photograph.

Because on the internet, adding a Clinton to a conspiracy is like putting gasoline on a fire.