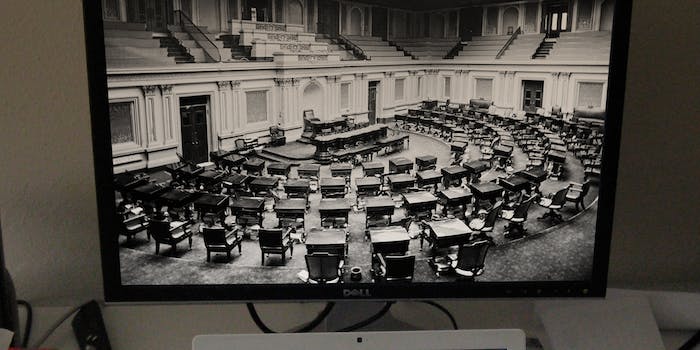 The battle against net neutrality heats up with new bill, lawsuits.

Collins’s bill is a resolution of disapproval, which is a legislative procedure introduced after the Contract With America-era Republican takeover of Congress in the mid-1990s. By passing such a motion, Congress has the ability to review new regulations created by a federal agency and then overturn those regulations using a joint resolution.

The legislation has 14 cosponsors, all of them Republicans.

The FCC’s effort, which was spurred by over four-million comments from members of the public overwhelmingly in support of net neutrality, was accomplished through the reclassification of Internet service providers as common carriers under Title II of the Communications Act. The reclassification meant that ISPs are required to treat all types of data the same and are prohibited from charging online content providers like Netflix or YouTube a fee for access to a “fast lane” to consumers.

Just as the FCC’s 3-2 vote ran along party lines, efforts to overturn that vote have been largely partisan efforts coming from the right. In the hours after the commission’s vote, House Judiciary Committee chairman Bob Goodlatte (R-Va.) sent a letter to FCC Chairman Tom Wheeler asserting that, “[w]e will not stand by idly as the White House, using the FCC, attempts to advance rules that imperil the future of the Internet.”

In a statement, Collins couched his opposition to net neutrality in fears that Title II reclassification would slow the construction of new broadband infrastructure and increase the cost of Internet service for consumers. “Resources that could go to broadband deployment will go to federal taxes and fees… We’ll all be paying more for less,” he said, labeling FCC’s move as an Executive Branch power grab. “The FCC likely forged its net neutrality solution under political pressure and will continue to attempt to grow its power in secret, despite Congress’ authority in this matter.”

PC World notes that a resolution of disapproval has some advantages over passing other types of legislation accomplishing a similar goal, like the Internet Freedom Act introduced by a collection of cable industry-backed lawmakers earlier this year. A resolution of disapproval can’t be filibustered in the Senate and also cannot be altered from its original form. However, if the bill does pass, it can still be vetoed by the president, which will kill it.

Opponents of reclassification aren’t only using legislative means to overturn the FCC’s decision. The agency has been hit with a flurry of lawsuits from industry groups.

The National Cable and Telecommunications Association, which represents major cable companies like Comcast and Time Warner Cable, has filed suit over the regulation and has hired former Solicitor General Ted Olson, who successfully convinced the U.S. Supreme Court to side with George W. Bush over Al Gore thereby ending the 2000 presidential election, as its counsel.

“Congress clearly intended for the Internet to evolve unencumbered by complex, inefficient government regulations,” Olson said in a statement to National Journal. “Instead of letting regulators play the central role in determining how the Internet evolves, they wanted these decisions to be left to the creativity of entrepreneurs, engineers, and consumers. The Commission’s decision to expand its power and apply heavy regulation has undermined that core principle.”

Other similar lawsuits have come in from the American Cable Association and CITA, which represents that wireless industry. Most of the suits have come from industry associations, which was to be expected, because funneling opposition through a separate organization allows companies with business in front of the FCC not to poison that direct relationship with their primary regulator.

The FCC knew these lawsuits were coming and repeatedly delayed the vote because officials wanted to be sure that they created the language in the reclassification so that it would be airtight against legal challenges.