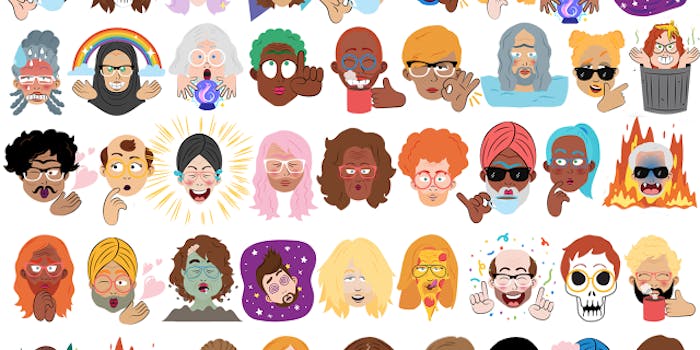 OK, we'll give the app a shot now.

Since debuting in September, there hasn’t been much reason to switch to Google’s chat app Allo. The app itself, a Facebook Messenger doppelgänger, didn’t really stand apart from the crowd despite a few quirky features. Google got the message, though. This week, it updated Allo with a custom emoji maker that might be cool enough to convince you to start using the app.

Allo now lets you turn a selfie into a suite of custom stickers. As detailed by FastCo Design, the tech behind it is pretty cool. Google uses image recognition algorithms to analyze your face, mapping and matching your facial features to ones illustrated by artist Lamar Abrams. Google guesstimates there are 563 quadrillion faces it can come up with based on the hundreds of designs Abrams created. And once your cartoon image is generated, you can also edit it yourself.

The idea is similar to Bitmoji, which Snapchat integrated into its own chat last summer. The difference here, though, is that Allo controls the initial creation of your digital avatar. With Bitmoji, you pick and choose your cartoon’s attributes and apparel from the very beginning. In both apps, the resulting depiction of yourself is very cartoony, which avoids the uncanny valley phenomenon that can happen when you get uncomfortably realistic. Even so, Google says it made efforts to ensure that its options represented all races, ages, and genders.

Abrams’s designs are actually just the first emoji style that Google is launching with Allo. In its blog post, Google says its working with “a range of artistic voices” to bring other styles into the app, as well. This pack speaks more to your sarcastic side, but future additions may be more cute or more sincere.

Allo’s custom emoji are available on Android now and will come to its iOS app soon.