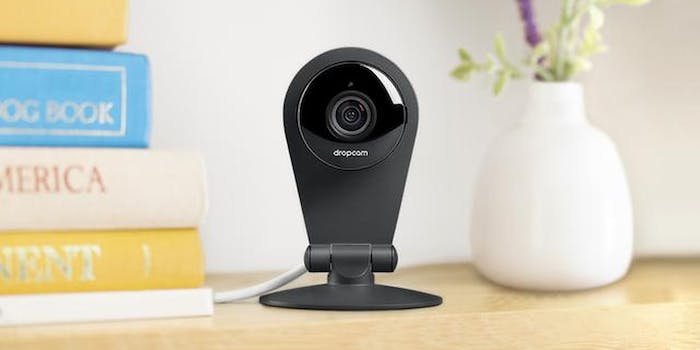 Is this the "future of the conscious home"?

Nest, which was acquired by Google to the tune of $3.2 billion, recently made a power purchase of its own. The purveyor of smart home appliances bought home-monitoring service Dropcam for $555 million, in a cash deal announced Friday afternoon.

The move appears to be part of a push to integrate Nest further into the home. The company’s flagship product is the connected Nest Thermostat, which learns your daily habits and adjusts your home’s temperature based on your schedule.

Dropcam produces home monitoring cameras that sell for $149 and $199 apiece and offers an optional cloud recording service that costs $99 a year. The service, which can store up to a week or a month of video, also allows users to receive activity notifications on their smartphones. Thirty-nine percent of Dropcam users opt into the cloud recording option, All Things D reported last year.

In a blog post, Nest founder Matt Rogers wrote, “Eventually, the plan is for us to work together to reinvent products that will shape the future of the conscious home and bring our shared vision to more and more people around the world.”

The Nest press release added that the cash deal was “subject to adjustments.” The deal was undertaken independently of Google, according to Re/code.

In addition to building out its smart home offerings, Nest may also be making moves into home security with the Dropcam acquisition. Dropcam plans to build new surveillance hardware that track doors opening and closing, according to the Wall Street Journal. This could literally help Nest gather detailed information on what happens behind closed doors. Currently, Nest has a single motion detector, meaning it can only track users’ movements when they pass in front of the thermostat or use Nest’s smartphone app to register their location.

According to the product page for Nest Protect, Nest’s smart smoke and carbon monoxide detector, “a New Nest Protect that works with wired security systems is already on its way.”

Dropcam was founded in 2009 after CEO and cofounder Greg Duffy wanted to figure out who had been letting their dog poop on his father’s lawn, and the company quickly evolved from offering a simple piece of hardware to a set of sleek custom-built cameras augmented by cloud recording services. More recently, Dropcam announced a further push into home security with Tabs, a small Bluetooth-enabled sensor that can be used to monitor places the regular Dropcam lens can’t see.

Before its acquisition, Dropcam had already privately raised $47.8 million, most of it from a $30 million Series C funding round last July.

Nest’s smart thermostat has been widely praised as an efficient money and energy-saver, and its development team boasts a number of ex-Apple acolytes. Google’s acquisition of Nest in January was seen as both an acqui-hire and part of a play by the search giant to get into smart home technologies and hardware. The company had previously touted [email protected], a service that was meant to connect home appliances to the Android operating system, which never materialized.

In May of this year, the Information reported that Nest had been considering acquiring the company.

“Nest and Dropcam are kindred spirits,” Duffy wrote in a blog post. “Our products and technologies are a natural fit and by joining up with Nest we can fully realize our vision.”

Nest appears to be dealing a pre-emptive blow to concerns about a Google-owned company having access to data about your movements around the home. In his blog post, Rogers wrote, “Like Nest customer data, Dropcam will come under Nest’s privacy policy, which explains that data won’t be shared with anyone (including Google) without a customer’s permission.”