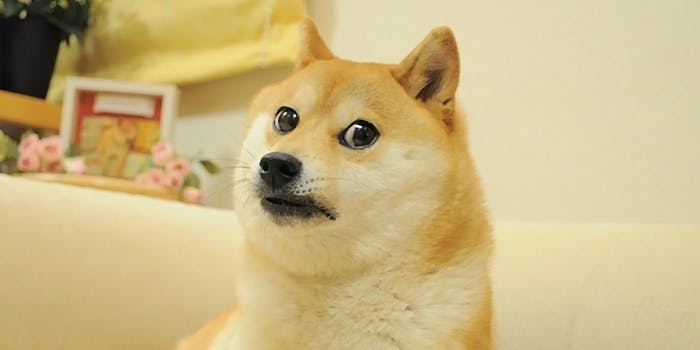 Goatse.cx, former home of the grossest image in the world, is now all about Shiba Inus.

One of the most infamous shock sites on the Internet has been repurposed to promote a digital currency based on an adorable Shiba Inu dog.

Goatse.cx, the gross-out site that once featured a photo of a man violently stretching out his anus with both hands, is now a Dogecoin sponsor.

Earlier this week the site uploaded a YouTube of an alleged lawyer named Kirk Johnson explaining how Goatse would now encourage visitors to buy and mine Dogecoins, the meme-themed cyrptocurrency.

“I told [Goatse’s owner] to align Goatse.cx with the most powerful financial force on the internet, Dogecoin,” Johnson says in the video. “Dogecoin is an online currency like Bitcoin that can give you everything you’ve ever dreamed of: money, houses, girls, the good life.”

Introduced in early December, Dogecoin has already surpassed the reigning cryptocurrency, Bitcoin, in trading volume—although not in value or market capitalization.

Dogecoin enthusiasts have helped raised hundreds of dollars for Jamaican bobsled team and Indian Olympic hopefuls. The currency, named after the doge meme featuring a perplexed Shiba Inu pup and Comic Sans text, was particularly embraced by communities on Reddit and 4chan who have gotten in the habit of gifting millions of dogecoins to each other for fun. This open exchange is possible because of how little a Dogecoin is worth. As of Thursday afternoon, one Dogecoin traded at a mere  $.0017.

Some Reddit users have raised concerns that Goatse.cx’s Dogecoin endorsement is just a marketing gimmick to drive traffic to the site. The Goatse admin claims it is all genuine and gave some background on what happened to the original image.

“The site was taken down by the .cx registrar in 2004 and is no longer allowed to show the image,” the Goatse administrator wrote. “Some wanted to launch Goatse Coin, but the Goatse Foundation found that Doge Coin is the superior crypto of the Internet and Goatse.cx is now an official Shibe for Doge Coin.”